Which of the following describes and explains what the observer hears as the buzzer moves away from him?

A large anchor is being lifted into a boat with metal sides. As the anchor leaves the water it
hits the side of the boat, making loud sounds and making waves on the surface of the water.

a. Describe the motions of the sound waves and the water waves.
b. Draw a diagram for each of the waves you described in part (a). Be sure to label each
diagram.
c. Describe how the wavelength is measured for the water waves

#35. Which of the following observations demonstrates that visible light waves are
electromagnetic and not mechanical?

#37, MCAS 2011
Which of the following statements best explains why lightning is seen before thunder is heard?

#3, MCAS 2011
In a large room, a sound wave traveling from a violin produces a tone with a frequency of 264 Hz. The speed of sound in the room is 340 m/s.  What is the wavelength of the sound wave from the violin?

2. When music plays through the speaker, the speaker rapidly moves back and forth in the cabinet. Which of the following conclusions is best supported by this observation?

21. A rope is stretched horizontally between two students. One of the students shakes an end of the rope up and down. Which of the following terms best describes the type of wave that is produced? 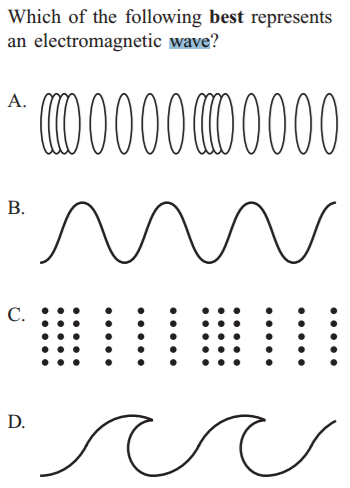 #37 Two waves traveling in the same medium are shown below.

#42 In which of the following media do sound waves most likely travel the fastest?
A. crude oil
B. distilled water
C. solid steel
D. warm air

#2. A student is shaking one end of a small rug with a ball on top of it. The wave that is produced travels through the rug and moves the ball upward, as shown in the diagram below 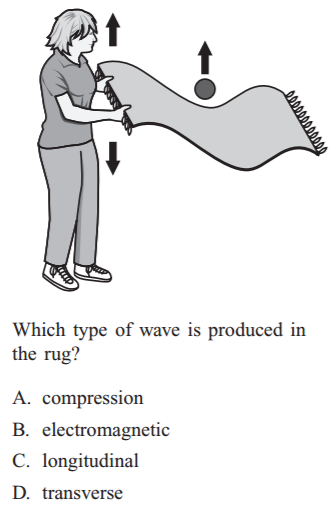 #25. Which of the following observed properties of a wave is changed by the Doppler effect?
A. amplitude
B. direction
C. frequency
D. speed

#28. The diagram below shows two students making a wave with a coiled spring 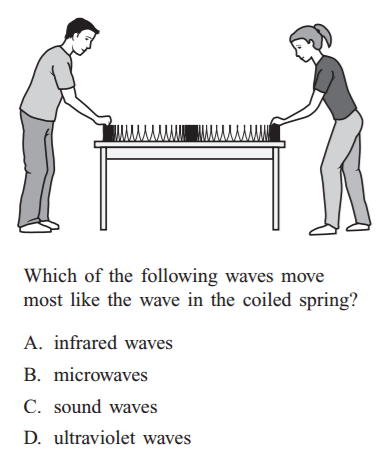 #30. The diagram below shows a representation of two different waves

#17. A windsurfer moves at 5 m/s while staying on the crest of a wave, as shown below. 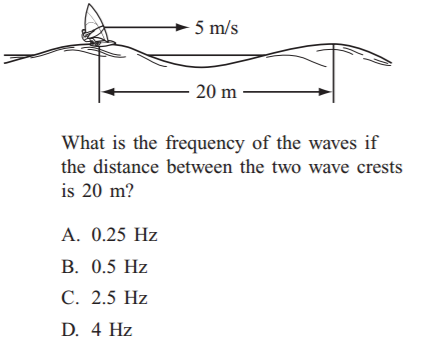 #29. A seismic wave called a P-wave travels through the solid part of Earth. In a P-wave, the solid particles of Earth move parallel to the direction the P-wave travels. P-waves are which of the following types of waves?
A. electromagnetic
B. longitudinal
C. torsional
D. transverse

#38.  At a given temperature, a longitudinal mechanical wave will travel fastest through which of the following?
A. a gas
B. a liquid
C. a solid
D. a vacuum

How does increasing the wavelength of a rope by 50 % decreases its frequency by 33 %.

The relation between frequency and wavelength is

HS-PS4-1. Use mathematical representations to support a claim regarding relationships among the frequency, wavelength, and speed of waves traveling within various media. Recognize that electromagnetic waves can travel through empty space (without a medium) as compared to mechanical waves that require a medium