Describes how gases tend to expand when heated.

When the pressure on a sample of a dry gas is held constant, the temperature and the volume will be in direct proportion.

(Only true when measuring temperature on an absolute scale)

This relationship can be written as: 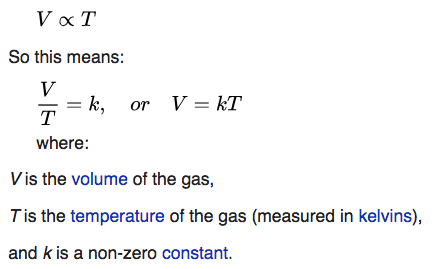 -> Gas expands as the temperature increases

-> Gas contracts as the temperature decreases

This relationship can be written as:

Important! This is not a law of physics! Rather, this is a generally useful rule, which is only valid when gas temperature and pressure is low enough for the atoms to usually be far apart from each other.  As we begin to deal with more extreme cases, this rule doesn’t hold up.

Let’s see this in action!

Named after Jacques Alexandre César Charles (1746 – 1823)  a French inventor, scientist, mathematician, and balloonist. Just so we’re all clear on this, he was kind of a mad scientist. And I say that with the utmost approval! 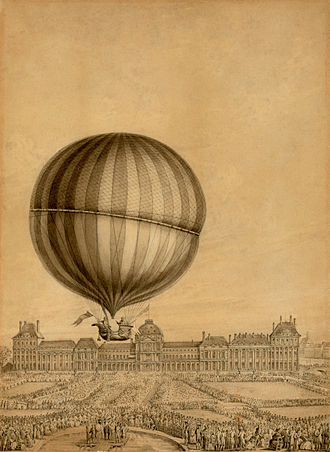 Contemporary illustration of the first flight by Prof. Jacques Charles with Nicolas-Louis Robert, December 1, 1783. Viewed from the Place de la Concorde to the Tuileries Palace (destroyed in 1871)

8.MS-PS1-4. Develop a model that describes and predicts changes in particle motion, relative spatial arrangement, temperature, and state of a pure substance when thermal energy is added or removed.

MS-PS1-4. Develop a model that predicts and describes changes in particle motion, temperature, and state of a pure substance when thermal energy is added or removed.

C-PE.1.5.2 Explain why gases expand to fill a container of any size, while liquids flow and spread out to fill the bottom of a container and solids hold their own shape. Justification includes a discussion of particle motion and the attractions between the particles.

C-PE.1.5.3 Investigate the behavior of gases. Investigation is performed in terms of volume (V ), pressure (P ), temperature (T ) and amount of gas (n) by using the ideal gas law both conceptually and mathematically.

Analyze proportional relationships and use them to solve real-world and mathematical problems.

Decide whether two quantities are in a proportional relationship, e.g., by testing for equivalent ratios in a table or graphing on a coordinate plane and observing whether the graph is a straight line through the origin.