Home » About » Women in math and science

Women in math and science

This is what I tell my daughter.

Reality TV and nonsense websites waste your time with “news” of celebrity dating and drama. Do you ever wonder why you aren’t reading about important issues?

Annie Easley (1933 – 2011) was an African-American computer scientist and mathematician. She worked for the Lewis Research Center of the National Aeronautics and Space Administration (NASA) and its predecessor, the National Advisory Committee for Aeronautics (NACA). She was a leading member of the team which developed software for the Centaur rocket stage. {Wikipedia}

Marie-Sophie Germain (1776 – 1831) was a French mathematician, physicist, and philosopher. Despite initial opposition from her parents and difficulties presented by society, she gained education from books in her father’s library including ones by Leonhard Euler and from correspondence with famous mathematicians such as Lagrange, Legendre, and Gauss. One of the pioneers of elasticity theory, she won the grand prize from the Paris Academy of Sciences for her essay on the subject. {Wikipedia, adapted} 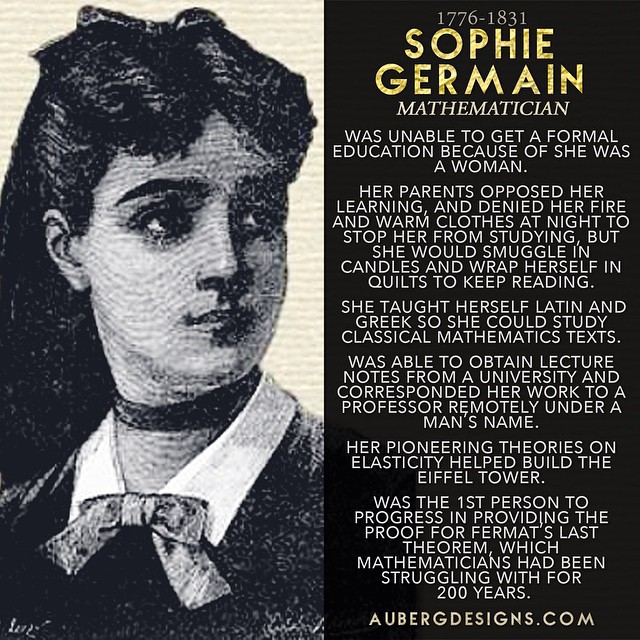 Dorothy Crowfoot Hodgkin,  Fellow of the Royal Society of London. She advanced the technique of X-ray crystallography, a method used to determine the three-dimensional structures of biomolecules. She proved the structure of penicillin, then the structure of vitamin B12, for which she became the third woman to win the Nobel Prize in Chemistry. In 1969, after 35 years of work and five years after winning the Nobel Prize, Hodgkin was able to decipher the structure of insulin. {Wikipedia, adapted}

Grace Hopper (1906 – 1992) was an American computer scientist and United States Navy Rear Admiral. She was one of the first programmers of the Harvard Mark I computer and invented the first compiler for a computer programming language. She helped develop COBOL, one of the first high-level programming languages. Owing to her accomplishments and her naval rank, she is sometimes referred to as “Amazing Grace”. {Wikipedia, adapted}

Hypatia (Greek: Ὑπατίᾱ , 350 – 370 CE) often called Hypatia of Alexandria (Ὑπατίᾱ η Αλεξανδρινή), was a Greek mathematician, astronomer, and philosopher in Egypt, then a part of the Eastern Roman Empire. She was the head of the School at Alexandria, where she taught philosophy and astronomy.  http://existentialcomics.com/comic/163 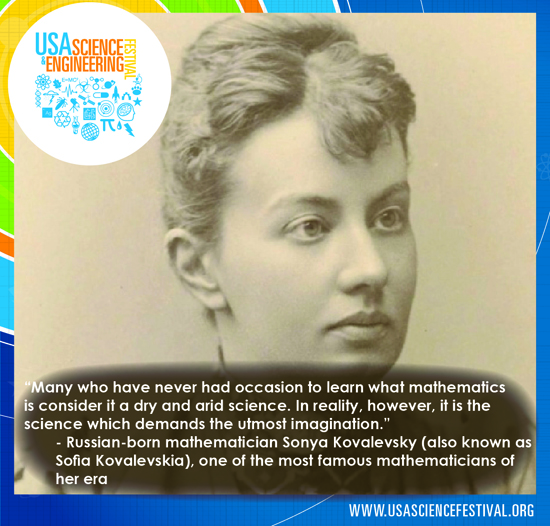 Ada Lovelace – Augusta Ada King, Countess of Lovelace (née Byron, 1815 – 1852.)  A British mathematician and writer, chiefly known for her work on Charles Babbage’s early mechanical general-purpose computer, the Analytical Engine. She created the first algorithm meant to be carried out by a machine, and as such is regarded as the first computer programmer. {Wikipedia, adapted}

Emmy Noether (1882 – 1935) was a German Jewish mathematician known for her landmark contributions to abstract algebra and theoretical physics. She was described by Albert Einstein, Jean Dieudonné, and others as the most important woman in the history of mathematics. In physics, Noether’s theorem explains the connection between symmetry and conservation laws. Noether’s theorem is such an impressive and fundamental analysis between math, and the way the world works (physics) that she actually explains why our universe has a law of conservation of momentum, and a law of conservation of energy! {adapted from  Wikipedia}