What is an astronomy? An astronomer admires the beauty of the stars and other celestial objects and wants to learn what they are and how they work. An astronomer is a scientist who tries to understand and interpret the Universe beyond Earth, and the Earth within the Universe. Using observational tools like space and ground-based observatories, computers and the good old paper and pencil, astronomers attempt to build up a picture, not only of what the Universe is like today, but what it was like billions of years ago, right back to the “Big Bang”.

To do this Astronomers have to understand the behaviour of matter in conditions that simply do not exist on Earth, whether at extreme temperatures or involving exotic objects and particles. They must use whatever kind of light, from radio to gamma rays, and particles (from cosmic rays to neutrinos) make it to Earth, along with sophisticated computers to piece together what happens beyond our planet.

Observational astronomers might look for new planets, try to understand stars, galaxies, black holes, and other phenomena, or try to map the entire sky. More theoretical researchers might measure magnetic fields or simulate the structural build-up of the stars, figure out how galaxies formed and how the expansion of the Universe evolved. To summarise, they build models of the Universe from fundamental physics and endeavour to make it understandable.

Difference between astronomy and astrology

Viewing space from here on Earth

Our Sun, and nuclear fusion

Proof that the Earth is revolving

Gravitational repulsion and the Dipole Repeller

Look up at the night sky – Are there immensely huge things that are just a bit too faint for the human eye to see? You betcha! Check out this amazing composite photo. This shows the actual apparent size of deep space objects, in our night sky, if they were brighter. 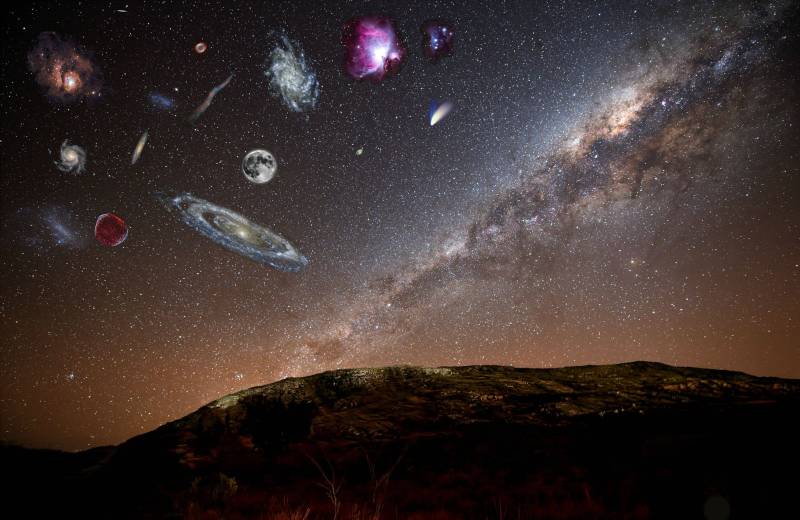 Here are the same object labeled

The images are in scale with one another, including the Moon, but not to the Milky Way background.

“Interestingly, according to modern astronomers, space is finite. This is a very comforting thought– particularly for people who can never remember where they have left things.”

“Ask ten different scientists about the environment, population control, genetics and you’ll get ten different answers, but there’s one thing every scientist on the planet agrees on. Whether it happens in a hundred years or a thousand years or a million years, eventually our Sun will grow cold and go out. When that happens, it won’t just take us. It’ll take Marilyn Monroe and Lao-Tzu, Einstein, Morobuto, Buddy Holly, Aristophanes .. and all of this .. all of this was for nothing unless we go to the stars.”

This website is educational. Materials within it are being used in accord with the Fair Use doctrine, as defined by United States law. §107. Limitations on Exclusive Rights: Fair Use

Notwithstanding the provisions of section 106, the fair use of a copyrighted work, including such use by reproduction in copies or phone records or by any other means specified by that section, for purposes such as criticism, comment, news reporting, teaching (including multiple copies for classroom use), scholarship, or research, is not an infringement of copyright. In determining whether the use made of a work in any particular case is a fair use, the factors to be considered shall include: the purpose and character of the use, including whether such use is of a commercial nature or is for nonprofit educational purposes; the nature of the copyrighted work; the amount and substantiality of the portion used in relation to the copyrighted work as a whole; and the effect of the use upon the potential market for or value of the copyrighted work. (added pub. l 94-553, Title I, 101, Oct 19, 1976, 90 Stat 2546)

Here’s how to e-mail me: