A constellation is a group of stars that forms an imaginary outline on the celestial sphere, typically representing an animal, mythological person or creature, or god.

The way that people name patterns of stars likely goes back to prehistory. Different cultures adopted their own sets of constellation. The list of what groups are recognized as constellations has changed significantly over time. Some have changed in size or shape. Some became popular, only to drop into obscurity. Others were limited to single cultures or nations.

The 48 traditional Western constellations are Greek. They are given in Aratus’ work Phenomena and Ptolemy’s Almagest, though their origin probably predates these works by several centuries. Constellations in the far southern sky were added from the 15th century until the mid-18th century when European explorers began traveling to the Southern Hemisphere. In 1928, the International Astronomical Union (IAU) formally accepted 88 modern constellations.

When we look up at the stars in the night sky, we don’t see what they really are: We don’t see that each is a huge star, very far away.  We don’t see that some of them are much closer while others much further away.  Instead, to our eyes the stars look like they’re tiny dots on a big celestial sphere, a few miles up. Kind of like this:

Similarly, during daytime, many people view the sky as if there is a big blue dome over us.

With just a little imagination we can imagine ourselves viewing the daytime sky – while at the same time, on the other side of the world, it would be nighttime.

So at night time, when we look up at constellations, they appear like bright dots up on a big black, globe above us. 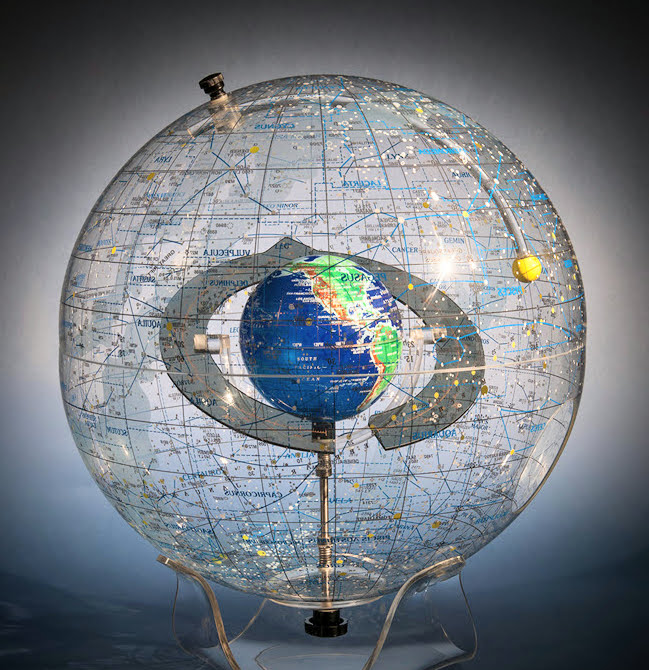 But is that true? Are constellations made of stars that are all the same distance away from the Earth? (Go to the next page)

(This section adapted from Wikipedia)

The southern sky, below about −65° declination, was only partially catalogued by ancient Babylonians, Egyptian, Greeks, Chinese, and Persian astronomers of the north. Knowledge that northern and southern star patterns differed goes back to Classical writers, who describe, for example, the African circumnavigation expedition commissioned by Egyptian Pharaoh Necho II in c. 600 BC and those of Hanno the Navigator in c. 500 BC.

Many of the 88 IAU-recognized constellations in this region first appeared on celestial globes developed in the late 16th century by Petrus Plancius, based mainly on observations of the Dutch navigators Pieter Dirkszoon Keyser[40] and Frederick de Houtman.[41][42][43][44]

Since July 2008, Fermi’s Large Area Telescope (LAT) has been scanning the entire sky each day, mapping and measuring sources of gamma rays, the highest-energy light in the universe. The emission may come from pulsars, nova outbursts, the debris of supernova explosions and giant gamma-ray bubbles located in our own galaxy, or supermassive black holes and gamma-ray bursts — the most powerful explosions in the cosmos — in others… The 21 gamma-ray constellations include famous landmarks — such as Sweden’s recovered warship, Vasa, the Washington Monument and Mount Fuji in Japan.

Godzilla constellation recognized by NASA claims a corner of space

How do we draw constellations?

Image from The Stars: A New Way to See Them, by H. A. Rey

The Stars: A New Way to See Them, On Codex99

The night sky tonight (another source)

Constellations are an illusion

Are constellations really groups of stars? (i.e. are they actually near each other)

Or are constellations really illusions? (i.e. stars actually are far apart, and only appear to be near each other, when seen from Earth.)

From Earth, stars in a constellation appear to be close to each other.

We tend to think that the stars are all at the same distance from us.

But it’s an illusion! In most cases, the stars of a constellation are located at different distances.

Let’s look at Orion the Hunter. Can you tell which star is the farthest? Which is the closest?

Yet just because a star is the brightest, doesn’t mean it’s the closest. You can’t tell its distance based on its appearance.

The farthest star in Orion is Alnilam, the middle belt star, at 1,359 LY (light-years, the distance light travels in a year.)

There’s 6 trillion miles in one light-year.

The closest is Bellatrix, the upper right shoulder star, at a distance of 243 LY.

HS-ESS1-1. Use informational text to explain that the life span of the Sun over approximately 10 billion years is a function of nuclear fusion in its core. Communicate that stars, through nuclear fusion over their life cycle, produce elements from helium to iron and release energy that eventually reaches Earth in the form of radiation.

Stars’ radiation of visible light and other forms of energy can be measured and studied to develop explanations about the formation, age, and composition of the universe. Stars go through a sequence of developmental stages—they are formed; evolve in size, mass, and brightness; and eventually burn out. Material from earlier stars that exploded as supernovas is recycled to form younger stars and their planetary systems. The sun is a medium-sized star about halfway through its predicted life span of about 10 billion years.

By the end of grade 12. The star called the sun is changing and will burn out over a life span of approximately 10 billion years. The sun is just one of more than 200 billion stars in the Milky Way galaxy, and the Milky Way is just one of hundreds of billions of galaxies in the universe. The study of stars’ light spectra and brightness is used to identify compositional elements of stars, their movements, and their distances from Earth.

ESS1.B  Some objects in the solar system can be seen with the naked eye. Planets in the night sky change positions and are not always visible from Earth as they orbit the sun. Stars appear in patterns called constellations, which can be used for navigation and appear to move together across the sky because of Earth’s rotation.

Benchmarks: American Association for the Advancement of Science

The patterns of stars in the sky stay the same, although they appear to move across the sky nightly, and different stars can be seen in different seasons. 4A/E1

Stars condensed by gravity out of clouds of molecules of the lightest elements until nuclear fusion of the light elements into heavier ones began to occur. Fusion released great amounts of energy over millions of years. 4A/H2cd