Etymology: From the Greek μετέωρος, meteōros, “high in the air”

Meteor seen from the site of the Atacama Large Millimeter Array https://en.wikipedia.org/wiki/Meteoroid#/media/File:Cosmic_Fireball_Falling_Over_ALMA.jpg

A small rocky or metallic body in outer space.

Size: Smaller than asteroids. From dust sized particles up to one meter diameter.

When a meteoroid becomes visible, as a streak of light in the sky, after it enters an atmosphere.

Often many meteors appear at the same time, coming from the same part of the sky. This is called a meteor shower. It happens when the Earth passes through a clump of space debris.

Most parts of most meteors burn up in the atmosphere, leaving behind only unnoticeable dust in the air.

The part of the meteor that makes it to the planet’s surface.

Made of Iron, Nickel and other trace elements

“The largest group of meteorites is the stones, and they once formed part of the outer crust of a planet or asteroid”

Lunar stone meteorites – These come from our moon, and are very rare.

Martian stone meteorites – These come from Mars, and are very, very rare.

Less than 2% of all meteorites

Major impact events have significantly shaped Earth’s history, have been implicated in the formation of the Earth–Moon system, the evolutionary history of life, the origin of water on Earth and several mass extinctions. Notable impact events include the Chicxulub impact, 66 million years ago, believed to be the cause of the Cretaceous–Paleogene extinction event.

Throughout recorded history, hundreds of Earth impacts (and exploding bolides) have been reported, with some occurrences causing deaths, injuries, property damage, or other significant localised consequences.

The Comet Shoemaker–Levy 9 impact provided the first direct observation of an extraterrestrial collision of Solar System objects, when the comet broke apart and collided with Jupiter in July 1994.

In 2018, physicist Stephen Hawking, in his final book Brief Answers to the Big Questions, considered an asteroid collision to be the biggest threat to the planet. In June 2018, the US National Science and Technology Council warned that America is unprepared for an asteroid impact event, and has developed and released the “National Near-Earth Object Preparedness Strategy Action Plan” to better prepare.

Aorounga is an eroded meteorite impact crater in Chad, Africa. The exposed remnant of the crater is 12.6 km (7.8 mi) in diameter and its age is estimated to be less than 345 million years (Carboniferous or younger). 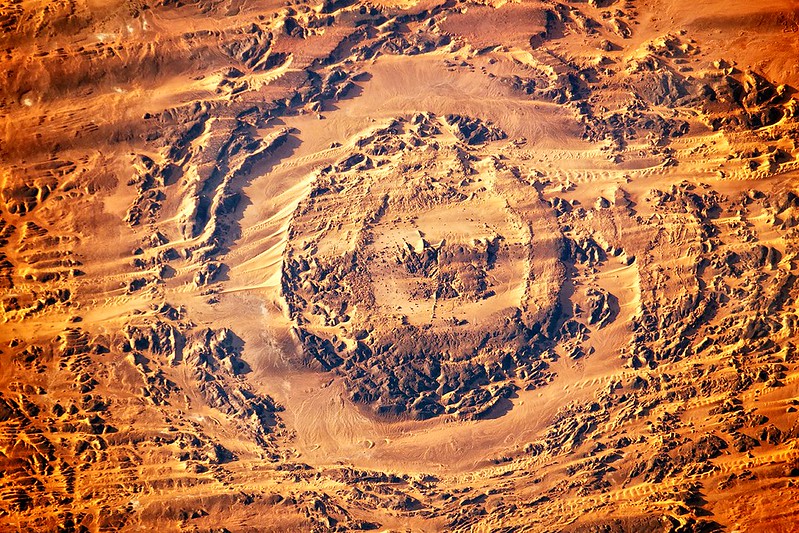 Chicxulub crater and the dinosaurs

What are dinosaurs? Our article on dinosaurs.

What killed off the dinosaurs? There is a tremendous amount of evidence that nearly all dinosaurs were killed off by a meteor impact 66 million years ago.

There had been a competing theory that dinosaurs were killed off by a massive, long scale eruption in the Deccan traps. The Deccan Traps are a large igneous province located in India – one of the largest volcanic features on Earth. No longer active, they cover 200,000 square miles today, and perhaps triple that area back when they were active.

There is some evidence to link the Deccan Traps eruption to the asteroid impact which created the Chicxulub crater in the Mexican state of Yucatán. Although the Deccan Traps began erupting well before the impact, argon-argon dating suggests that the impact may have caused an increase in permeability that allowed magma to reach the surface and produced the most voluminous flows, accounting for around 70% of the volume.

The combination of the asteroid impact and the resulting increase in eruptive volume may have been responsible for the mass extinctions that occurred at the time that separates the Cretaceous and Paleogene periods, known as the K–Pg boundary.

National Geographic page on discovering the crater with gravity mapping and cenote mapping.

Did the Chicxulub crater trigger the Deccan Traps

The asteroid that slammed into the ocean off Mexico 66 million years ago and killed off the dinosaurs probably rang the Earth like a bell, triggering volcanic eruptions around the globe that may have contributed to the devastation, according to a team of University of California, Berkeley, geophysicists.

Specifically, the researchers argue that the impact likely triggered most of the immense eruptions of lava in India known as the Deccan Traps, explaining the “uncomfortably close” coincidence between the Deccan Traps eruptions and the impact, which has always cast doubt on the theory that the asteroid was the sole cause of the end-Cretaceous mass extinction.

“If you try to explain why the largest impact we know of in the last billion years happened within 100,000 years of these massive lava flows at Deccan … the chances of that occurring at random are minuscule,” said team leader Mark Richards, UC Berkeley professor of earth and planetary science. “It’s not a very credible coincidence.”

Richards and his colleagues marshal evidence for their theory that the impact reignited the Deccan flood lavas in a paper to be published in The Geological Society of America Bulletin, available online today (April 30) in advance of publication.

While the Deccan lava flows, which started before the impact but erupted for several hundred thousand years after re-ignition, probably spewed immense amounts of carbon dioxide and other noxious, climate-modifying gases into the atmosphere, it’s still unclear if this contributed to the demise of most of life on Earth at the end of the Age of Dinosaurs, Richards said.

“This connection between the impact and the Deccan lava flows is a great story and might even be true, but it doesn’t yet take us closer to understanding what actually killed the dinosaurs and the ‘forams,'” he said, referring to tiny sea creatures called foraminifera, many of which disappeared from the fossil record virtually overnight at the boundary between the Cretaceous and Tertiary periods, called the KT boundary. The disappearance of the landscape-dominating dinosaurs is widely credited with ushering in the age of mammals, eventually including humans.

He stresses that his proposal differs from an earlier hypothesis that the energy of the impact was focused around Earth to a spot directly opposite, or antipodal, to the impact, triggering the eruption of the Deccan Traps. The “antipodal focusing” theory died when the impact crater, called Chicxulub, was found off the Yucatán coast of Mexico, which is about 5,000 kilometers from the antipode of the Deccan traps….

Some meteors have made impacts on Earth relatively recently – by “recently” we mean during the era of history in which modern humans have been around.  Some of the most famous events are:

A superheated blast from the skies obliterated cities and farming settlements north of the Dead Sea around 3,700 years ago, preliminary findings suggest.

Radiocarbon dating – and unearthed minerals that instantly crystallized at high temperatures – indicate that a massive airburst caused by a meteor that exploded in the atmosphere instantaneously destroyed civilization in a 25-kilometer-wide circular plain called Middle Ghor, said archaeologist Phillip Silvia.

The event also pushed a bubbling brine of Dead Sea salts over once-fertile farm land, Silvia and his colleagues suspect.

People did not return to the region for 600 to 700 years, said Silvia, of Trinity Southwest University in Albuquerque. He reported these findings at the annual meeting of the American Schools of Oriental Research on November 17.

Excavations at five large Middle Ghor sites, in what’s now Jordan, indicate that all were continuously occupied for at least 2,500 years until a sudden, collective collapse toward the end of the Bronze Age. Ground surveys have located 120 additional, smaller settlements in the region that the researchers suspect were also exposed to extreme, collapse-inducing heat and wind. An estimated 40,000 to 65,000 people inhabited Middle Ghor when the cosmic calamity hit, Silvia said.

The most comprehensive evidence of destruction caused by a low-altitude meteor explosion comes from the Bronze Age city of Tall el-Hammam, where a team that includes Silvia has been excavating for the last 13 years. Radiocarbon dating indicates that the mud-brick walls of nearly all structures suddenly disappeared around 3,700 years ago, leaving only stone foundations.

What’s more, the outer layers of many pieces of pottery from same time period show signs of having melted into glass. Zircon crystals in those glassy coats formed within one second at extremely high temperatures, perhaps as hot as the surface of the sun, Silvia said. High-force winds created tiny, spherical mineral grains that apparently rained down on Tall el-Hammam, he said. The research team has identified these minuscule bits of rock on pottery fragments at the site.

A Meteor may have Exploded in the Air 3,700 Years Ago, Obliterating Communities Near the Dead Sea

Tall el-Hammam is a archaeological site in Jordan. Wikipedia

Commensurate with these results are the archaeological data collected from across the entire occupational footprint (36ha) of Tall elHammam, demonstrating a directionality pattern for the high-heat, explosive 3.7kaBP Middle Ghor Event that, in an instant, devastated approximately 500km2 immediately north of the Dead Sea, not only wiping out 100% of the MBA cities and towns, but also stripping agricultural soils from once-fertile fields and covering the eastern Middle Ghor with a super-heated brine of Dead Sea anhydride salts pushed over the landscape by the Event’s frontal shockwaves. Based upon the archaeological evidence, it took at least 600 years to recover sufficiently from the soil destruction and contamination before civilization could again become established in the eastern Middle Ghor.

In 1490 CE, central China, Ch’ing Yang, Shasi Province, there are historical records which indicate that a substantial number of people may have been killed by a giant meteorite impact shattering and impacting.

The Tunguska event was a large explosion that occurred near the Stony Tunguska River in Siberia, Russia, on the morning of 30 June 1908 (NS). The event flattened 2,000 square kilometres (770 square miles) of forest, yet caused no known human casualties. The explosion is generally attributed to the air burst of a meteor. This is the largest impact event on Earth in recorded history.

‘There is evidence that there were two massive bolide explosions which occurred over South America in the 1930’s.

One seems to have occurred over Amazonia, near the Brazil-Peru border, on August 13, 1930, whilst the other was over British Guyana on December 11, 1935.

These dates coincide with the peaks of the Perseids and the Geminids, although any association with those meteor showers is very tentative. The identification of such events is significant in particular in that they point to the need for re-assessment of the frequency of Tunguska-type atmospheric detonations.”

Was a 1954 explosion over Melrose caused by jets? Or a tiny meteor?

Was a 1954 explosion over Melrose caused by jets? Or a tiny meteor?

MS-ESS2-2. Construct an explanation based on evidence for how geoscience processes have changed Earth’s surface at varying time and spatial scales.

[Clarification Statement: Emphasis is on how processes change Earth’s surface at time and spatial scales that can be large (such as slow plate motions or the uplift of large mountain ranges) or small (such as rapid landslides or microscopic geochemical reactions), and how many geoscience processes (such as earthquakes, volcanoes, and meteor impacts) usually behave gradually but are punctuated by catastrophic events. ]