Students will be able to

differentiate between a terrestrial planet and a dwarf planet.

explain why the number of planets keeps appearing to change

Why is Pluto now classified as a dwarf planet

Let’s start by looking at a recent photograph of pluto!

Here are some recent photographs of Pluto and it’s largest moon, Charon.

“This animation was inspired by two iconic images of Pluto, the global true color mosaic and the lookback image with atmospheric haze.”

“It represents a fly-around from the day side to the dark side and back (not the rotation of Pluto itself).”

How big is Pluto compared to Earth? 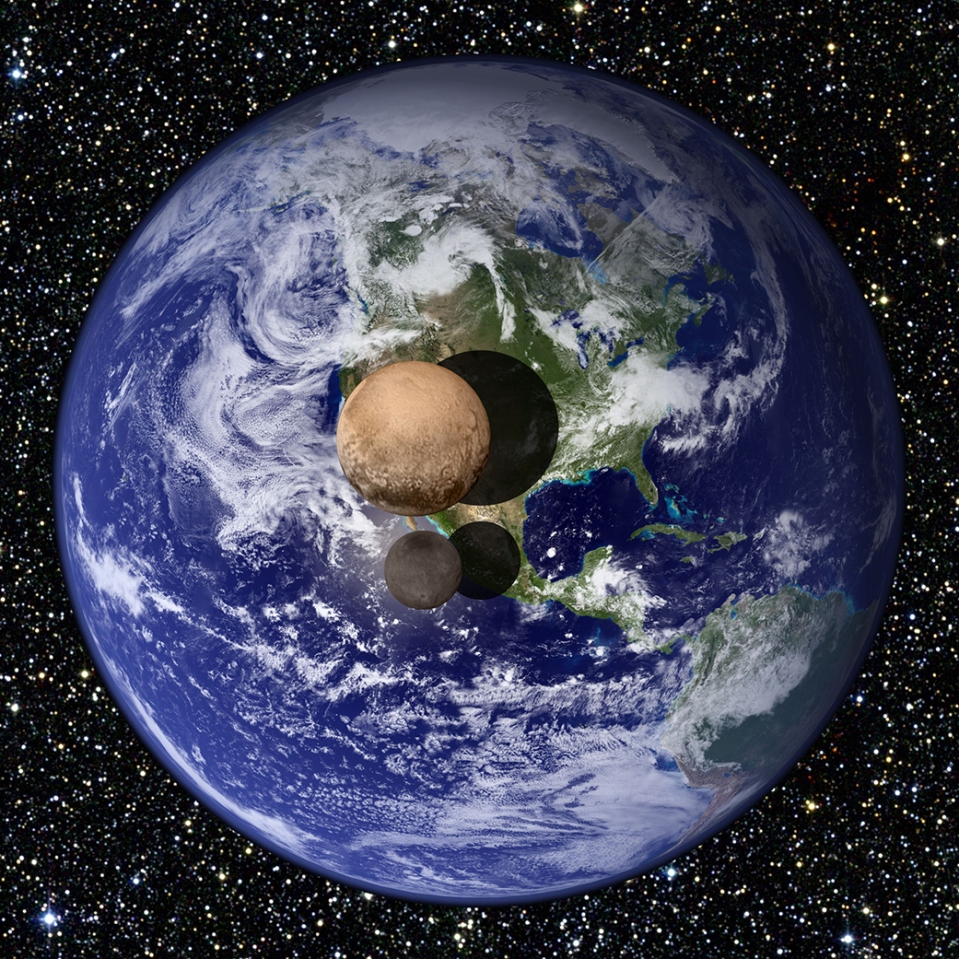 Why is Pluto no longer considered a planet?

Contrary to popular belief, its not just Pluto that has been put in to a new category. Many bodies in space have been added to, and then removed from, the planet category.

The number of planets has changed over time, as people have changed the definition of the word.

Notice how many “planets” were removed, as we learned that they more properly placed in the newly developed asteroids category.  The same is true for Pluto, Eris, and Sedna – now they’re in the dwarf planet category.

Definition of a dwarf planet

The International Astronomical Union (IAU) defines a dwarf planet as a celestial body that:

* is in direct orbit of the Sun

* has not cleared the neighborhood around its orbit.

It is estimated that there are hundreds to thousands of dwarf planets in the Solar System, most of which lie beyond the orbit of Pluto.

Hundreds more dwarf planets may be found when the entire region known as the Kuiper belt is explored.

The number of dwarf planets may exceed 10,000, when objects scattered outside the Kuiper belt, out in the Oort cloud are considered.

The Oort cloud – named after Dutch astronomer Jan Oort – is a cloud of icy planetesimals surrounding our Sun at a distance of up to 50,000 AU (0.8 light years.)

This picture shows the sizes of the original three dwarf planets (Eris, Ceres, and Pluto) as compared to Earth. It also shows Pluto’s large moon Charon (and its two small moons Nix and Hydra) and Eris’s moon Dysnomia to scale. The image also shows Earth’s Moon (Luna) and the planet Mars for comparison. None of the distances between objects in this image are to scale.
Images courtesy of NASA, ESA, JPL, and A. Feild (STScI).

What does “cleaning out the neighborhood” mean?

We say that an object isn’t called a planet unless it clears out its local neighborhood. 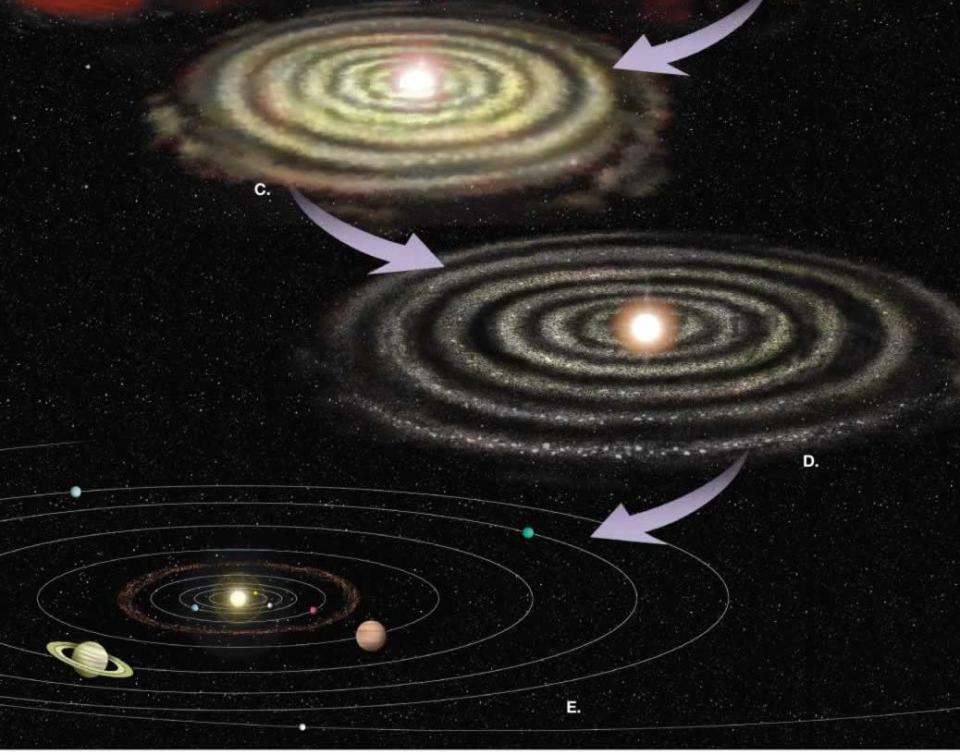 Text here is adapted from solarsystem.nasa.gov/solar-system/kuiper-belt/overview/

The Kuiper Belt is a very large region of space in our solar system, very far from the Sun.

The icy worlds and comets that we’ve discovered here so far are much smaller than Earth’s Moon.

The Kuiper Belt is a doughnut-shaped ring of icy objects around the Sun, extending just beyond the orbit of Neptune from about 30 to 55 AU.

Short-period comets (which take less than 200 years to orbit the Sun) originate in the Kuiper Belt.

There may be a trillion or more potential comets within the Kuiper Belt.

Some dwarf planets within the Kuiper Belt have thin atmospheres that collapse when their orbit carries them farthest from the Sun.

Several dwarf planets within the Kuiper Belt have moons.

Cold and dark: It is not clear if worlds in this distant, cold region are not capable of supporting life as we know it.

It is possible that a large planet (say, Earth sized), exists here.

Pluto is just one of several icy dwarf planets that we’ve discovered in the Kuiper belt.

Others are shown here, and more are expected to be discovered.

The Oort cloud – named after Dutch astronomer Jan Oort – is inferred to be a very huge region, very far from the Sun, containing billions of icy planetesimals, and perhaps even Earth sized objects.

The closest part of the Oort cloud to us would be 2,000 AU (astronomical units) away from the sun. One AU is the distance from the Sun-to-the-Earth – so this Oort cloud wouldn’t even begin to exist until we get that far out.

Based on observations and theoretical calculations, we expect that it may extend as far as 200,000 AU away from our sun – that’s up to three light years away!

Although in some ways a part of our solar system – because they very slowly revolve around our Sun – in other ways these Oort cloud objects are in interstellar space!

In the diagram below, all of the planets, even Pluto, are within the ) to 10 region.

The Oort cloud is seen to begin much further out! 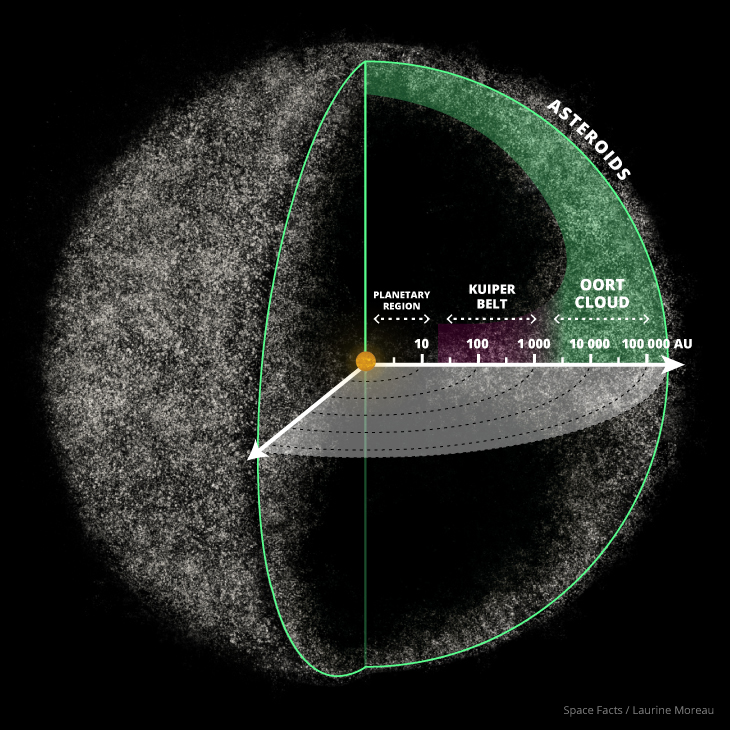 The Science Has Spoken: Pluto Will Never Be A Planet Again

ESS1. Earth’s Place in the Universe

8.MS-ESS1-1b. Develop and use a model of the Earth-Sun system to explain the cyclical pattern of seasons, which includes Earth’s tilt and differential intensity of sunlight on different areas of Earth across the year.

8.MS-ESS1-2. Explain the role of gravity in ocean tides, the orbital motions of planets, their moons, and asteroids in the solar system.