How do we know that the Earth revolves around the Sun?

When we look up into the night time sky, and observe the motion of the stars, it does appear as if the Earth is standing still, and the sun and stars rotate around us.

Over the course of a half a year, if the Earth really revolves around to the other side of the solar system, shouldn’t it have moved so much that there would be difference in how the stars appeared?

Stars at the ecliptic poles appear to move in circles, stars exactly in the ecliptic plane move in lines, and stars at intermediate angles move in ellipses. Shown here are the apparent motions of stars with the ecliptic latitudes corresponding to these cases,

Effect of annual aberration on the apparent position of three stars at ecliptic longitude 270 degrees, and ecliptic latitude 90, 45 and 0 degrees, respectively. Such stars would transit the observer’s meridian at midday on the December solstice, and midnight on the June solstice. Drawn by Portnadler 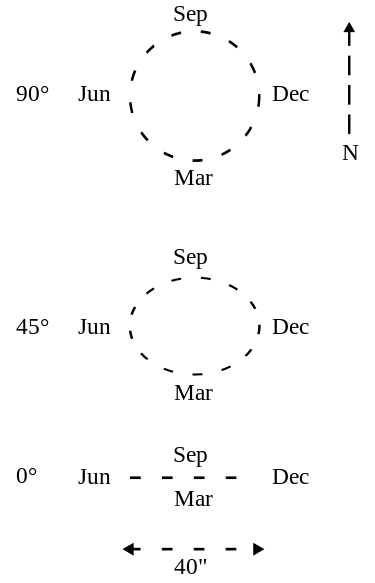 Here’s another way to visualize this:

If you are on the equator, and look at the stars above, they are in the ecliptic plane.

As the year goes by, their position appears to move (slightly) back and forth, creating a line (see animation below.)

If you are at either pole, and look at the stars above, they are at the ecliptic poles.

As the year goes by their position appears to move, creating a (very tiny) circle.

If you are at an intermediate position (between the poles and equator) then the stars overhead, as the year passes, would appear to move in (very tiny) elliptical shapes.

Another way to visualize this – here the motion of the stars is not traced out for you. You have to look at each star, individually, for a few seconds.

The pattern is the same as the animation above – stars over the equator move back and forth; stars at the pole make circles, and stars overhead latitudes in-between trace out ellipses.

Here’s an analogy: the aberration of rain:

This section excerpted from Ask-An-Astronomer

There was no straightforward proof for the motion of Earth until 1725 when James Bradley discovered stellar aberration. This is (apparent) yearly change in positions of all stars in the sky due to Earth’s own motion. Aberration arises due to adding up of the speed of light coming from the star and Earth’s own speed. This is a very complex phenomenon and its description requires some math.

Another, much simpler, consequence of Earth’s motion is stellar parallax. If Earth changes its position relative to the stars, then the stars should appear to change position in the course of the year.

A common experiment illustrating parallax is just looking at a close object (a finger, a pencil etc) with one eye at the time. When you switch from one to the other eye, the object will appear to move against the background. Closer the object is to your eyes, more pronounced the effect is.

Parallax should not be confused with aberration: parallax arises from the change of Earth’s position and depends on the distance to the star, while aberration is caused by Earth’s great speed and does not depend on how far the star is.

Parallax of a star was first measured by Bessel in 1838. It was not measured before because this change of star’s apparent position is very small (the stars are very far from us). This was a very important discovery because Aristotle himself mentioned the lack of observable stellar parallax as the proof that the Earth is not moving (he didn’t have a telescope and didn’t know that the stars are so distant).

A third discovery proving Earth’s motion was that of Doppler effect. Wavelength of the light that we receive from objects moving relative to us becomes a little shorter (i.e. bluer) when we approach the source and becomes longer (i.e. redder) when we move away from the source.

When Earth moves toward a star, the star will appear slightly bluer (only high-tech instruments can measure this) while it will appear redder when Earth is on the other side of the orbit and moves in the opposite direction. This effect proves that Earth has a velocity relative to the stars, similar to aberration.

How do we know that the Sun revolves around the center of our galaxy?

The sun revolves around the Milky Way galaxy about once every 240 million years. Mathematically, the proof is in Kepler and Newton’s equations.

If the sun and other stars were not revolving around the galaxy, then they would have to be condensing into a smaller and smaller galaxy as gravity did its job. Observation of Doppler shifting can illustrate which is happening [and it’s the former, not the latter]

2016 Massachusetts Science and Technology/Engineering Curriculum Framework
ESS1. Earth’s Place in the Universe
8.MS-ESS1-1b. Develop and use a model of the Earth-Sun system to explain the cyclical pattern of seasons, which includes Earth’s tilt and differential intensity of sunlight on different areas of Earth across the year.
8.MS-ESS1-2. Explain the role of gravity in ocean tides, the orbital motions of planets, their moons, and asteroids in the solar system

ESS1.B: Earth and the Solar System: The solar system consists of the sun and a collection of objects, including planets, their moons, and asteroids that are held in orbit
around the sun by its gravitational pull on them. (MS-ESS1-2),(MSESS1-3)