Apps to explore the Solar system

This image is not to scale – if those planets were scaled correctly in size, we’d need to put 100,000 computer monitors end-to-end in order to make a realistic scale model of our solar system.

If the Moon Were Only 1 Pixel

Our solar system is really mostly empty space. Want to see for yourself? launch this interactive app “If The Moon Were Only 1 Pixel”: An accurate scale model of the Solar System” and scroll through our solar system.

Harmony of the spheres

Navigate through the solar system in 3D

The Sun seems to move against the background stars as seen from the orbiting Earth. The ecliptic is the path the Sun appears to trace through the stars. This process repeats itself on a cycle lasting a little over 365 days. (Wikipedia, Ecliptic, 9/22/16) 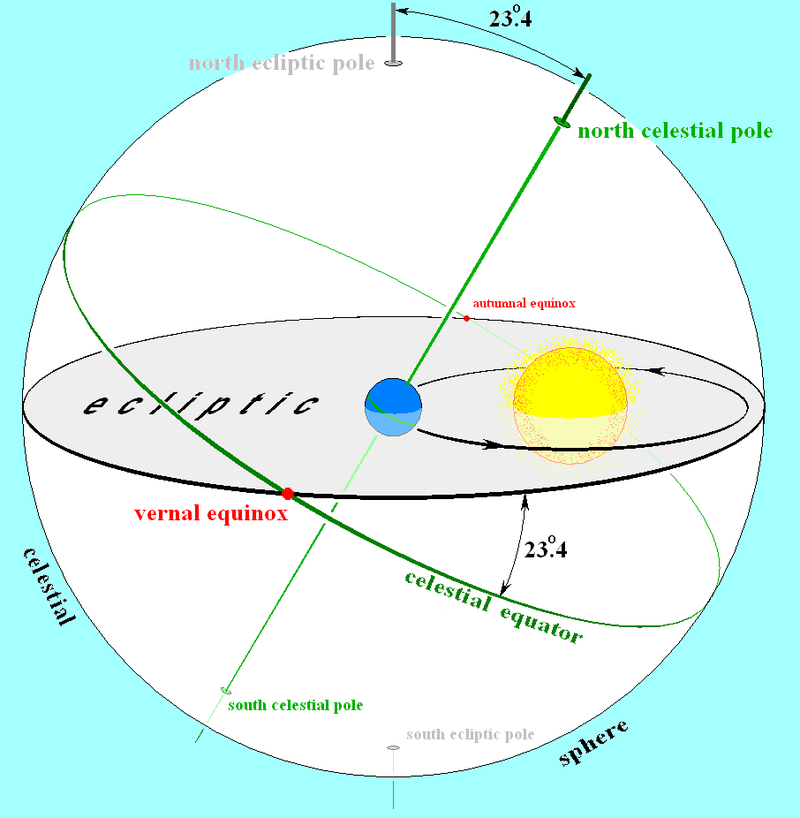 The plane of Earth’s orbit projected in all directions forms a reference plane: the ecliptic.

The ecliptic is shown projected outward (gray) to the celestial sphere, along with Earth’s equator and polar axis (green).

The plane of the ecliptic intersects the celestial sphere along a great circle (black), the same circle on which the Sun seems to move as Earth orbits it.

The intersections of the ecliptic and the equator on the celestial sphere are the vernal and autumnal equinoxes (red), where the Sun seems to cross the celestial equator.

We often imagine that the planets are lined up, like spinning toy tops, all pointing the same direction. That’s not quite correct, as this image shows.

Not only are the planets millions of miles apart, they don’t all spin the same way. You imagine that their North and South poles are ninety degrees – perpendicular to their direction of orbit, but that’s really only true for Mercury.  The other planets have substantial tilts to their rotational axis, thus creating seasons.

Uranus – unlike all other major worlds – has it’s rotational axis tilted towards the Sun, which seemed impossible to explain, if it formed in the same way that all the other worlds formed.  Many scientists see this is evidence that, at one point in the distant past, there must have been a massive collision between Uranus and some other world.

Obliquity of the Nine Planets
http://solarviews.com/eng/solarsys.htm

Orbital inclination of the planets

By definition, the flat ‘plane’ of the solar system is the plane that Earth is revolving in.

What about all of the other planets, comets, asteroids, etc.?

Many are also almost in the same plane as us, as seen in the diagram below.

Note that as we go further out from the Sun (Pluto and beyond) celestial bodies no longer move in the ecliptic at all.

As we get further out into the solar system, the orbital inclination loses all pattern, and begins to become random.

An amazing interactive model of our solar system, including planets and moons.

“If The Moon Were Only 1 Pixel”: An accurate scale model of the Solar System”

Path of solar system as Sun moves through galaxy

….The orbits of the major planets of the solar system all lie in a narrow plane, which is tilted at about 60 degrees to the disc of stars that forms the Milky Way. Like this:

Understandings about the Nature of Science (Crosscutting Concepts):  Science knowledge has a history that includes the refinement of, and changes to, theories, ideas, and beliefs over time.

Science Is a Human Endeavor:  Scientific knowledge is a result of human endeavor, imagination, and creativity. Individuals and teams from many nations and cultures have contributed to science and to advances in engineering.

Core Idea ESS1: Earth’s Place in the Universe
What is the universe, and what is Earth’s place in it?

By the end of grade 8. The solar system consists of the sun and a collection of objects, including planets, their moons, and asteroids that are held in orbit around the sun by its gravitational pull on them. This model of the solar system can explain tides, eclipses of the sun and the moon, and the motion of the planets in the sky relative to the stars. Earth’s spin axis is fixed in direction over the short term but tilted relative to its orbit around the sun. The seasons are a result of that tilt and are caused by the differential intensity of sunlight on different areas of Earth across the year.
By the end of grade 12. Kepler’s laws describe common features of the motions of orbiting objects, including their elliptical paths around the sun. Orbits may change due to the gravitational effects from, or collisions with, other objects in the solar system. Cyclical changes in the shape of Earth’s orbit around the sun, together with changes in the orientation of the planet’s axis of rotation, both occurring over tens to hundreds of thousands of years, have altered the intensity and distribution of sunlight falling on Earth. These phenomena cause cycles of ice ages and other gradual climate changes

Next Generation Science Standards
Connections to Nature of Science: Science Models, Laws, Mechanisms, and Theories Explain Natural Phenomena.
A scientific theory is a substantiated explanation of some aspect of the natural world, based on a body of facts that have been repeatedly confirmed through observation and experiment, and the science community validates each theory before it is accepted. If new evidence is discovered that the theory does not accommodate, then the theory is generally modified in light of this new evidence. (HS-ESS1-2),(HS-ESS1-6)