What are we learning?

The diversity and unity of life on Earth can be explained by the process of evolution.

Over time, the process of natural selection leads:

the extinction of existing species,
and the evolution of new species.

Why are we learning this?

Evolution accounts for the most fundamental features of the world around us: the similarities among living things, the diversity of life, and many features of the physical world we inhabit.

Explanations of these phenomena in terms of evolution draw on results from physics, chemistry, geology, many areas of biology, and other sciences. Thus, evolution is the central organizing principle that biologists use to understand the world.

To teach biology without explaining evolution deprives students of a powerful concept that brings great order and coherence to our understanding of life.

Evolution  – once life started, how it changed over time.

Abiogenesis & spontaneous generation  – how the very first living cells came into existence. Here we learn about civilization’s first attempts to seriously think about this.

Fossils: Evidence of evolution over time and Dating of fossils

Is evolution a theory or a fact?

Chicken or the egg

Evolution of our kidneys

Survivorship bias and why people think cavemen were a thing

Evolution of turtles from early reptiles

Before DNA based life, we probably had an RNA based world

Evolution of the first animals

Evolution and the 2nd law of thermodynamics

A fact is something that has really occurred, or is actually the case.
A hypothesis an idea about how something happened, an educated guess.
A phenomenon is something amazing.

A fact is something that has really occurred or is actually the case.
Facts are true, justified beliefs.

A hypothesis is a testable, proposed explanation for a phenomenon.

A phenomenon is any kind of observable or measurable occurrence in nature.

What are some examples of phenomenon?

* When water gets hot enough it boils; that’s a phenomenon.

* When a rock is dropped, gravity pulls it down, faster and faster; that’s a phenomenon.

* When you pluck a guitar string, it vibrates and creates a musical sound; that’s a phenomenon.

But evolution is “just a theory”

Scientists use the word “theory” in a very precise way. We use it in the same way that we talk about the “theory of electricity” and the “theory of gravity.” Notice that no one denies that electricity or gravitation are real.

In science, the word theory means – “A unifying, logical structure that ties together all known facts.”

There are many different ways to create electrical sparks; electrical currents, and millions of different devices (and living beings) that use electricity. Yet all this can be described using just four math equations – they describe all behaviors of electricity.

Together these equations (Maxwell’s equations) are the theory of electricity. Electricity is real. It’s not “just a theory”.

The existence of these electrical phenomena are facts: the relationship between these facts is the theory.

Every time you drop an object, it falls. The longer it falls, the faster it goes (unless something like air resistance slows it down). That’s not just true here on Earth – objects are also pulled down by gravity on the moon, Mars, and asteroids. Even the Sun has gravity.  There are millions of different objects that respond to the pull of gravity on Earth.

Yet all his can be described using just one math equation, Newton‘s theory of universal gravitation. 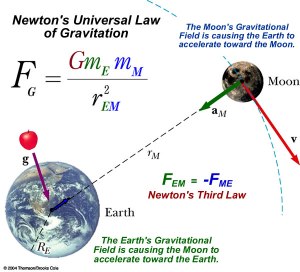 A rock falling is real; a planet orbiting the Sun is real. That’s not “just a theory”.

The existence of these phenomena are facts: the relationship between these facts is what scientists call the theory.

8.MS-LS4-4. Use a model to describe the process of natural selection, in which genetic variations of some traits in a population increase some individuals’ likelihood of surviving and reproducing in a changing environment. Provide evidence that natural selection occurs over many generations. Clarification Statements: The model should include simple probability statements and proportional reasoning. Examples of evidence can include Darwin’s finches, necks of giraffes, and peppered moths.

8.MS-LS4-5. Synthesize and communicate information about artificial selection, or the ways in which humans have changed the inheritance of desired traits in organisms. Clarification Statement: Emphasis is on the influence of humans on genetic outcomes in artificial selection (such as genetic modification, animal husbandry, and gene therapy).

HS-LS4-1. Communicate scientific information that common ancestry and biological evolution are supported by multiple lines of empirical evidence, including molecular,  anatomical, and developmental similarities inherited from a common ancestor (homologies), seen through fossils and laboratory and field observations.

HS-LS4-2. Construct an explanation based on evidence that Darwin’s theory of evolution by natural selection occurs in a population when the following conditions are met: (a) more offspring are produced than can be supported by the environment, (b) there is heritable variation among individuals, and (c) some of these variations lead to differential fitness among individuals as some individuals are better able to compete
for limited resources than others.

HS-LS4-4. Research and communicate information about key features of viruses and bacteria to explain their ability to adapt and reproduce in a wide variety of environments.

HS-LS4-5. Evaluate models that demonstrate how changes in an environment may result in the evolution of a population of a given species, the emergence of new species over generations, or the extinction of other species due to the processes of genetic drift,
gene flow, mutation, and natural selection.