What vocabulary & concepts were learned in earlier grades?
Make connections to prior lessons from this year.
This is where we start building from.

This lesson is from http://evolution.berkeley.edu/evolibrary/article/0_0_0/evo_05

What’s a family tree – of individuals?

They go by many names

But they’re all basically the same thing.

The root of the tree represents the ancestral lineage.

Tips of the branches represent descendants of that ancestor.

When a lineage splits (speciation), it is represented as branching on a phylogeny.

These phylogenies (or cladograms) trace patterns of shared ancestry between lineages.

Each lineage has a part of its history that is unique to it alone and parts that are shared with other lineages.

A clade is a grouping that includes a common ancestor and all the descendants (living and extinct) of that ancestor.

Using a phylogeny, it is easy to tell if a group of lineages forms a clade.

Imagine clipping a single branch off the phylogeny — all of the organisms on that pruned branch make up a clade.

Clades are nested within one another — they form a nested hierarchy. A clade may include many thousands of species or just a few.

Some examples of clades at different levels are marked on the phylogenies below. Notice how clades are nested within larger clades.

So far, we’ve said that the tips of a phylogeny represent descendant lineages. Depending on how many branches of the tree you are including however, the descendants at the tips might be different populations of a species, different species, or different clades, each composed of many species.

Do the specific names mean anything?

What’s the difference between a phylogeny, an evolutionary tree, a phylogenetic tree, and a cladogram?

Not much. Most biologists use these terms interchangeably. All mean a tree structure that represents the evolutionary relationships within a group of organisms.

The context in which the term is used will tell you more details about the representation (e.g., whether the tree’s branch lengths represent nothing at all, genetic differences, or time; whether the phylogeny represents a reconstructed hypothesis about the history or the organisms or an actual record of that history; etc.)

To other biologists, “cladogram” suggests that the lengths of the branches in the diagram are arbitrary, while in a “phylogeny,” the branch lengths indicate the amount of character change.

The words “phylogram” and “dendrogram” are also sometimes used to mean the same sort of thing with slight variations.

These vocabulary differences are subtle and are not consistently used within the biological community. For our purposes here, the important things to remember are that organisms are related and that we can represent those relationships (and our hypotheses about them) with tree structures.

Excerpted from Understanding Evolution, project of the University of California Museum of Paleontology and the National Center for Science Education
From https://evolution.berkeley.edu/evolibrary/article/phylogenetics_02

Are there higher or lower forms of life?

Several times in the past, biologists have committed themselves to the erroneous idea that life can be organized on a ladder of lower to higher organisms. This idea lies at the heart of Aristotle’s Great Chain of Being.

Here is the 1579 drawing of the Great Chain of Being from the Franciscan missionary Didacus Valades, titled Rhetorica Christiana.

It’s easy to misinterpret phylogenies as implying that some organisms are more “advanced” than others.

Here’s a phylogeny showing the relationship of mosses to other land plants. In this simplified phylogeny, a speciation event occurred resulting in two lineages.

One led to the mosses of today; the other led to the fern, pine, and rose.

Since that speciation event, both lineages have had an equal amount of time to evolve.

Although mosses branch off early on the tree of life, and share many features with the ancestor of all land plants, living moss species are not ancestral to other land plants. Nor are they more primitive. Mosses are the cousins of other land plants.

Evolution produces a pattern of relationships among lineages that is tree-like, not ladder-like.

pattern of relationships among lineages

Just because we read phylogenies from left to right, there is no correlation with level of “advancement.”

For any speciation event on a phylogeny, the choice of which lineage goes to the right and which goes to the left is arbitrary.

The following phylogenies are equivalent:

Biologists often put the clade they are most interested in (whether that is bats, bedbugs, or bacteria) on the right side of the phylogeny.

Humans did not evolve from chimpanzees

Humans and chimpanzees are evolutionary cousins and share a recent common ancestor that was neither chimpanzee nor human.

Humans are not “higher” or “more evolved” than other living lineages. Since our lineages split, humans and chimpanzees have each evolved traits unique to their own lineages.

Like family trees, phylogenetic trees represent patterns of ancestry. However, while families have the opportunity to record their own history as it happens, evolutionary lineages do not — species in nature do not come with pieces of paper showing their family histories. Instead, biologists must reconstruct those histories by collecting and analyzing evidence, which they use to form a hypothesis about how the organisms are related — a phylogeny.

Using DNA analysis to make a clade including whales

The origins of the whale lineage, this fully aquatic mammal – so different from its terrestrial relatives – puzzled biologists. Darwin was famously puzzled by the origin of whales because he needed to be able to explain how you could get such a remarkably different animal from a series of small modifications, each of which would be beneficial. He did not know what the whale’s closest relatives were. For example, he hypothesised that they might have been changed from something like a bear.

But now we can take the DNA from whales and compare it to other mammals to see which ones they are most similar to. The answer was quite surprising: whales are most closely related to hippos.

This initially startling idea, which came to be known as the ‘whippo hypothesis’, was generated by DNA sequence analysis, but it has now been widely corroborated. I think Darwin would probably quite like this because it gives a picture of a possible semi­aquatic stage between fully terrestrial mammals and the fully aquatic ones. 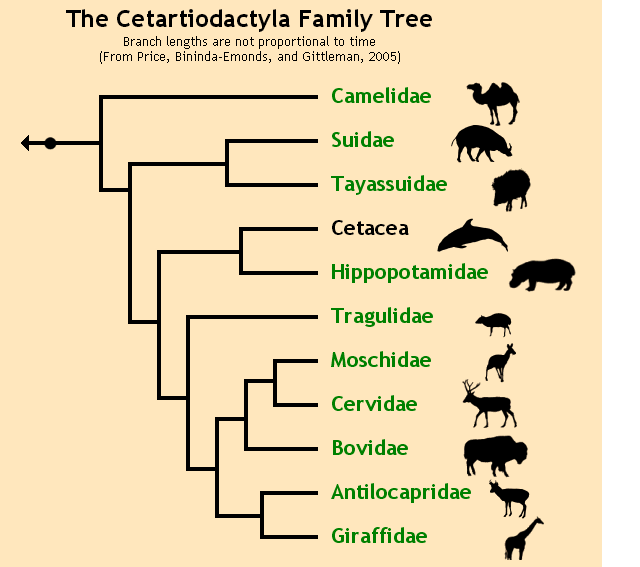