DNA translation and the Genetic Code

Intro: DNA is how the body stores info, but it isn’t useful until we actually make stuff with it. So let’s see how DNA ends up building proteins.

Vocabulary needed in this lesson

gene – Many DNA molecules bonded together, in a sequence which represents building instructions for a protein.
location: nucleus

replication – the process by which a DNA gene makes a copy of itself.
location: nucleus

mRNA – molecule used in making copies of genes.
location: starts in nucleus, then moves out into cytoplasm

transcription – the process by which the cell copies DNA into mRNA.
location: nucleus

Where do events take place?

The following sectionis from How do Cells Read Genes?, University of Utah, Genetic Science Learning Center

How do cells read genes?

Think about the protein-coding sequence of a gene as a sentence made up of 3-letter words.

Each 3-letter word is a codon, specifying a single amino acid in a protein.

Have a look at this sentence:

If you were to split this sentence into individual 3-letter words, you would probably read it like this:

The sun was hot but the old man did not get his hat.

This sentence represents a gene. Each letter corresponds to a nucleotide base, and each word represents a codon.

What if you shifted the “reading frame?” You would end up with:

As you can see, only one of these reading frames translates into an understandable sentence.

In the same way, only one reading frame within a gene codes for the correct protein.

…is the instruction manual that all life on Earth uses to read the DNA sequence of a gene, and build a corresponding protein.

Proteins are made of amino acids that are strung together in a chain.

The code has several key features:

Note: Protein-building machinery does not read DNA directly. Instead, it reads an intermediate molecule, called messenger RNA, that is copied from DNA.

Let’s do this ourselves.

Here we see the genetic code in the form of a wheel.

Each mRNA nucleotide is abbreviated as a single letter.

Each amino acid is represented by graphic of what it looks like,
with the abbreviation for the amino acid name on top of the pic.

As demonstrated in class, we read it from the inside-towards-the outside.

This app will let you see how it is done, one step-at-a-time. App: Transcribe and Translate a Gene!

In class we do this using these worksheets:

Where do we get amino acids to begin with?

They originate from the protein in our food

-> absorbed into bloodstream -> travels to every cell in the body ->

amino acids bond together, while emptied tRNA molecules fall off.

This process is mind-bogglingly fast! This video shows how fast:

In order to be replicated, DNA must first unwind its characteristic double helix structure to form what is called the replication bubble. The resulting single-stranded DNA (ssDNA) serves as the template for replication, which occurs at the two edges of the bubble termed the replication fork.

The two strands of ssDNA are replicated simultaneously but with slightly different methods. The leading strand seen on the top in these animations is replicated continuously by the protein calledDNA polymerase (orange). DNA polymerase matches the base pair on the template with its corresponding nucleotide to reform the double-stranded DNA with its characteristic double helix shape.

The lagging strand seen on the bottom is replicated as the DNA unwinds in pieces using short segments of RNA (red) to guide DNA polymerase. While not shown in this animation, a different protein swaps the RNA segments for DNA and then the pieces are joined together by DNA ligase.

Why make proteins? What does the body use them for? 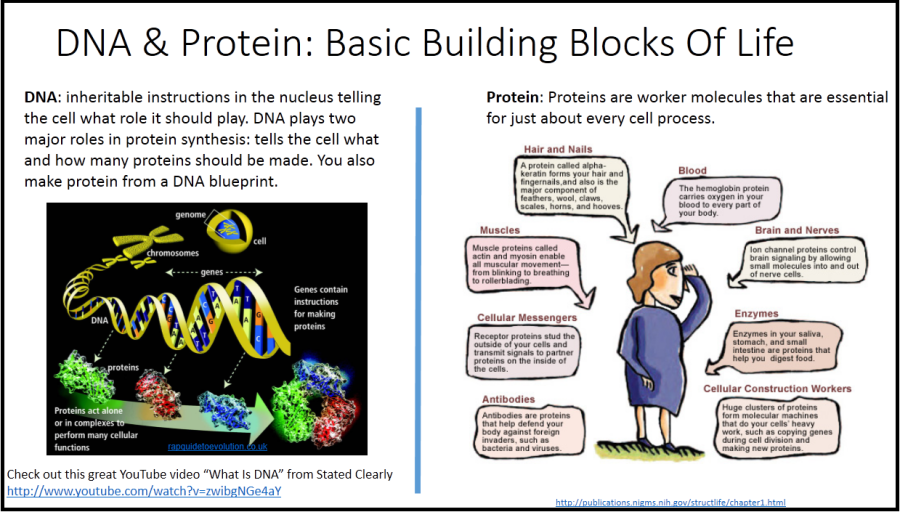 Here’s a hands on lab: 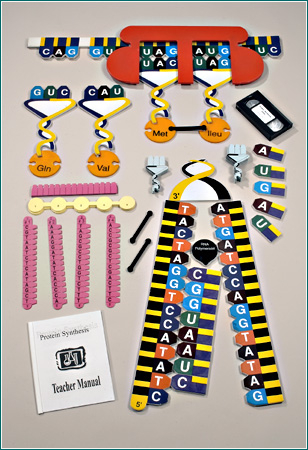 A teacher’s guide to this lab: Protein Synthesis Teacher Manual