Learn the different types of blood cells
Learn the function of each type
Discover the use of hemoglobin
Understand the purpose of blood clotting
Discover where and how blood is made
Learn the truth about whether the blood in our veins is really blue.

There are 3 major types of blood cells 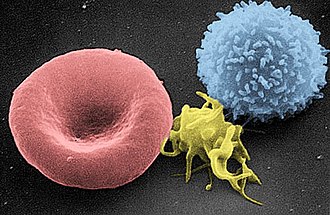 carry O2 from lungs to all tissues in the body

carry CO2 from cells in all tissues in body, back to lungs

lose their nucleus – and hence, their DNA – during formation.

can’t repair any damage to themselves, or even reproduce

thus new RBCs must constantly be made

It binds to oxygen:

this is what allows blood to hold O2

The rest of the body’s CO2 is carried in the bloodstream plasma, not by the RBCs.

part of our immune system.

Here we see an animation of the clotting process.

Source (to be found)

Blood cells are temporary. They are made, do a job, and then die. They don’t reproduce. Where do new blood cells come from?

They come blood stem cells, which live in bone marrow. At high altitudes, air is less dense than at sea level because of decreased air pressure.
This means that a person who ascends to high altitudes takes in fewer oxygen molecules per breath.

a. Describe and explain an immediate response that occurs in the respiratory system when a person first reaches high altitudes.

b. Describe and explain an immediate response that occurs in the circulatory system when a person first reaches high altitudes.

If a person lives at high altitudes for an extended period of time, other body responses occur. One response is an increase in the number of red blood cells.

c. Explain how this response is helpful to the body.

At high altitudes, air temperature is also generally colder than at sea level.

d. Describe and explain one internal body response that occurs when a person has been outside long enough for his core temperature to drop.

Is blood without oxygen really blue?

People see anatomical charts, where veins are drawn as blue. Many people think that blood in our veins, the blood without oxygen is blue, like this.

Some people think that this blood is purple, like this: (HTML Internet Purple)

But I’ve never seen blood that looks like that.

Does blood in our veins look red? Pantone Dark Red looks like this:

This is still not like the darker shades of blood that I’ve seen.

The dark blood in our veins looks more like this:

(By the way if your computer’s video display is not set to a high value for number of colors shown, all of the above may look like only one or two colors. And, since all video screens are different, I might be seeing something different than you are. )

Anyway, the color that I personally think resembles blood in its darker state is not purple. It is red with a lot of darkness added to it. Or a lack of lightness, or whatever. But it is red.

Is Blood Ever Blue? PDF handout

Why do veins appear to be blue?

Light striking skin can slightly penetrate the skin. Most of this light is absorbed at or very near the skin’s surface.

A few red light rays are shown exiting the skin from the vein as well as blue light being reflected from the skin. The blue light basically masks the red, thus veins appear blue when viewing them through pale skin.

Different types of blood cells in other animals

Most people will have learnt that human blood, as well as that of most other vertebrates, is red as a result of haemoglobin, a large protein found in red blood cells which contains iron atoms within its structure.

Haemoglobin is what’s known as a respiratory pigment, and it plays a vital role in the body, ferrying oxygen around the body to your cells and helping carbon dioxide back to the lungs where it can be exhaled. The large protein consists of four smaller units which themselves contain small sections called haems, each of which contains an iron atom. This can ‘bind’ to oxygen, giving red blood cells their oxygen transporting ability.

The iron atoms are also responsible for haemoglobin’s colour. The individual haems are conjugated molecules – they have lots of alternating double and single bonds between carbon atoms in their structure – and this conjugation causes them to absorb light wavelengths in the visible portion of the spectrum, leading to a coloured appearance. The presence of the iron atom modifies this absorption slightly, and as such haemoglobin is a red colour when oxygenated, and a slightly darker red when deoxygenated.

It’s a commonly believed myth that deoxygenated blood is blue – after all, if you look through your skin at any of your veins, which carry deoxygenated blood away from your body’s cells, they have a definite blue-grey hue. However, this appearance is in fact caused by the interaction of light with both the blood and the skin and tissue covering the veins.

BLUE blood is normal for for crustaceans, spiders, squid, octopuses, and some molluscs all have blue blood as a result of having a different respiratory pigment. Rather than haemoglobin, these creatures use a protein called haemocyanin to transport oxygen. The differing structure of the pigment, as well as the incorporation of copper atoms instead of iron, leads to the blood being colourless when deoxygenated, and blue when oxygenated. They also bind to oxygen in a different manner to haemoglobin, with two copper atoms binding to each oxygen molecule.

GREEN blood, too, is possible, in some species of worms and leeches. This is an interesting one, in that the individual units of chlorocruorin, the protein leading to a green blood colouration, are actually very similar in appearance to haemoglobin. In fact, they’re near identical – the only different is an aldehyde group in the place of a vinyl group in the chemical structure (although the name might suggest otherwise, chlorocruorin doesn’t contain any chlorine atoms).

Despite this minor difference, a noticeable colour change is the result – deoxygenated blood containing chlorocruorin is a light green colour, and a slightly darker green when oxygenated. Oddly, in concentrated solutions, it takes on a light red colour. A number of organisms that have chlorocruorin in their blood also have haemoglobin present as well, resulting in an overall red colouration.

Chlorocruorin isn’t always necessary for green blood, however, as the green-blooded skink lizard illustrates. This lizard is found in New Guinea, and despite its blood containing haemoglobin like other vertebrates, its blood is a distinctive green colour. The colour is due to a difference in how they recycle haemoglobin. Humans recycle haemoglobin in the liver, by breaking it down first into biliverdin, and then bilirubin. The lizards, however, aren’t capable of breaking down biliverdin any further, so it accumulates in their blood, giving a green colour intense enough to overpower the red colour of haemoglobin.

Finally, violet blood is also possible, albeit in a limited range of marine worms (including the rather unfortunately named penis worms). This colour is caused by yet another different respiratory pigment, this time one called haemorythrin. Haemorythrin contains individual units which themselves contain iron atoms; when deoxygenated, the blood is colourless, but when oxygenated it is a bright violet-pink. Like most of the other respiratory pigments, it’s a lot less efficient than haemoglobin, in some cases only having around a quarter of the oxygen carrying capacity.

College Board Science Standards. LSH-PE.2.1.3 Describe, using information gathered from print and electronic resources, the structure and function of at least two organs that are part of a human body system (e.g., circulatory, digestive, gas exchange).