Using virtual reality in the classroom

We learn through lectures and reading. We especially learn through illustrations, photographs, diagrams, and animations. But a limitation is that so many of these images are flat, two-dimensional.  Not surprisingly, many folks have trouble visualizing what a system is really like, if they only have two dimensional pictures.

An obvious practical solution is to make a lesson hands-on: Students can take a field trip to see gears and machines in a power plant; see ancient ruins on site; travel to a valley and fly over a vast ecosystem to see different parts of the environment.  But there’s only so much that a school can do in practice: we can’t purchase every manipulative and lab, or travel to see every place that we talk about.

Yet with today’s technology we can actually model machines, cells, valleys and volcanoes, ecosystems, distance cities, and archaeological sites, in three dimensions – and then bring all of this into the classroom. We bring these models in to a virtual space that students can explore.

And that’s what we are already doing in our classrooms! First, let’s learn a few terms: XR, AR, and VR.

When virtual information and objects are overlaid on the real world. This experience enhances the real world with digital details such as images, text, and animation. This means users are not isolated from the real world and can still interact and see what’s going on in front of them.

Users are fully immersed in a simulated digital environment. Individuals must put on a VR headset or head-mounted display to get a 360 -degree view of an artificial world. This fools their brain into believing they are walking on the moon, swimming under the ocean or stepped into whatever new world the VR developers created.

A team of researchers at ESA’s mission control centre in Darmstadt, Germany, are investigating new concepts for controlling rovers on a planet and satellites in orbit. Image from the ESA, esa.int/ESA_Multimedia/Images/2017/07/Reality_check

Digital and real-world objects co-exist and can interact with one another in real-time. This experience requires an MR headset… Microsoft’s HoloLens is a great example that, e.g., allows you to place digital objects into the room you are standing in and give you the ability to spin it around or interact with the digital object in any way possible.

Excerpts of these definitions from Bernard Marr, What Is Extended Reality Technology? A Simple Explanation For Anyone, Forbes, 8/12/2019

When students actively participate in augmented reality learning, the class is effectively a lab, as opposed to being a lecture.  Here we are studying ecosystems with an app from the World Wildlife Foundation, WWF Rivers. 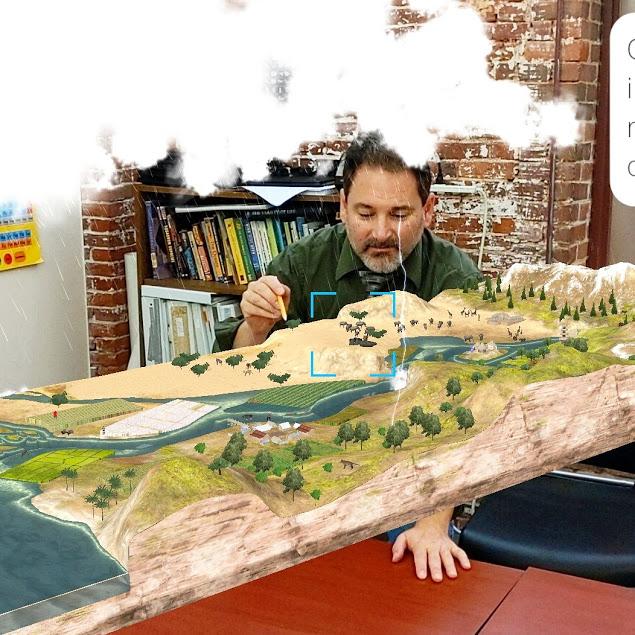 This student has their head in the clouds 😉

As we walk around the room, we see the Earth and all of it’s layers in a realistic 3D view. Here we stood above the arctic circle, and took screenshots as we moved down latitude, until we were above the antarctic.

A simple machine is a mechanical device that changes the direction or magnitude of a force. They are the simplest mechanisms that use mechanical advantage to multiply force.

Here we are examining gears, including bicycle gears.

If you can’t visually imagine things, how can you learn?

If someone can’t visually imagine things, how can you learn? We know some people can’t conjure up mental images. But we’re only beginning to understand the impact this “aphantasia” might have on their education.

A discussion of an inability to form mental images , congenital aphantasia. This is believed to affect 2% of the population.

6. Structure and Function – The way an object is shaped or structured determines many of its properties and functions: Complex and microscopic structures and systems can be visualized, modeled, and used to describe how their function depends on the shapes, composition, and relationships among its parts; therefore, complex natural and designed structures/systems can be analyzed to determine how they function

Digital Tools [9-12.DTC.a] – 2. Select digital tools or resources based on their efficiency and effectiveness to use for a project or assignment and justify the selection.

AP-CSP Curriculum Guides
LO 3.1.3 Explain the insight and knowledge gained from digitally processed data by using appropriate visualizations, notations, and precise language.
EK 3.1.3A Visualization tools and software can communicate information about data.
EK 3.1.3E Interactivity with data is an aspect of communicating.

Finding the coefficient of friction lab

Why Is There a Tidal Bulge Opposite the Moon?

Egg-cellent Ideas for Osmosis and Diffusion 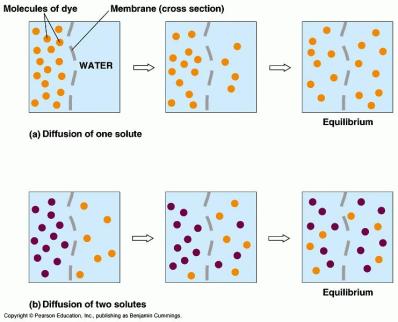 During this activity students investigate the concepts of osmosis and diffusion using eggs. To prepare for the activity,:

* measure and record the circumference of the raw egg

* Place the egg in a beaker filled with white vinegar.

* Students to record their observations.

* Store the eggs in a refrigerator for 24 hours.

* View again and record their observations.

* Return the egg to the refrigerator for another 24 hours.

* View again and record their observations

However, the membrane remains on the egg. The size of the egg increases because of the movement of water in the vinegar through the cell membrane.

Since water moves from an area of high concentration to an area of low concentration, this process is called osmosis. Obviously, none of the materials on the inside of the egg are able to pass through the membrane.

First, have the students determine the mass of the egg and record it in the table.

They should pour 150 ml of each substance into its own beaker.

Add the eggs and store in a refrigerator for 24 hours.

After 24 hours, remove the eggs from the beakers and record their observations.

Students should record the volume of liquid in the beaker as well as the mass of the egg.

Use a toothpick to pop the egg membrane and record their observations. Be sure to have paper towels handy as some eggs may squirt!)

To illustrate the concept of diffusion, add a drop or two of extract (vanilla, bubble gum, lemon, or cinnamon) into a deflated balloon.

Blow up the balloon, tie it off, and place inside a shoe box. To make sure the lid stays on the box, use masking tape to secure it. During class, ask students to life one end of the shoe box lid and smell the contents. Their eyes should remain closed when they do this. Ask each student to reveal what they smelled. Show the class what was inside the box and instruct them to draw a picture and record their observations. Challenge students to write an explanation (using the correct vocabulary) of why the box smells like the scent when it was only put inside the balloon.

The shoe box smelled of the scent even though it was only placed on the inside of the balloon due to the process of diffusion. Every balloon has microscopic holes in its surface. The vapors were able to pass through the membrane from an area of high concentration to an area of low concentration. However, the liquid scent molecules were too large to pass through the membrane.

Another way to illustrate osmosis and diffusion is using a tea bag and some water. During class, place a tea bag in a beaker of warm water. Allow time for students to record their observations. Challenge them to write an explanation using the correct vocabulary.

Water flows by osmosis into the tea bag. The students can see this if you remove the tea bag from the beaker and squeeze it to see the water come out. The tea leaves diffuse through the tea bag and into the water; this changes both the color and flavor of the water in the beaker.

At Seaport Academy, science education isn’t about drills and worksheets. We motivate students with hands-on manipulatives, interactive apps, three dimensional animations, connections to the world around then, and labs. Here we’re learning how to explore the microscopic world with a microscope. 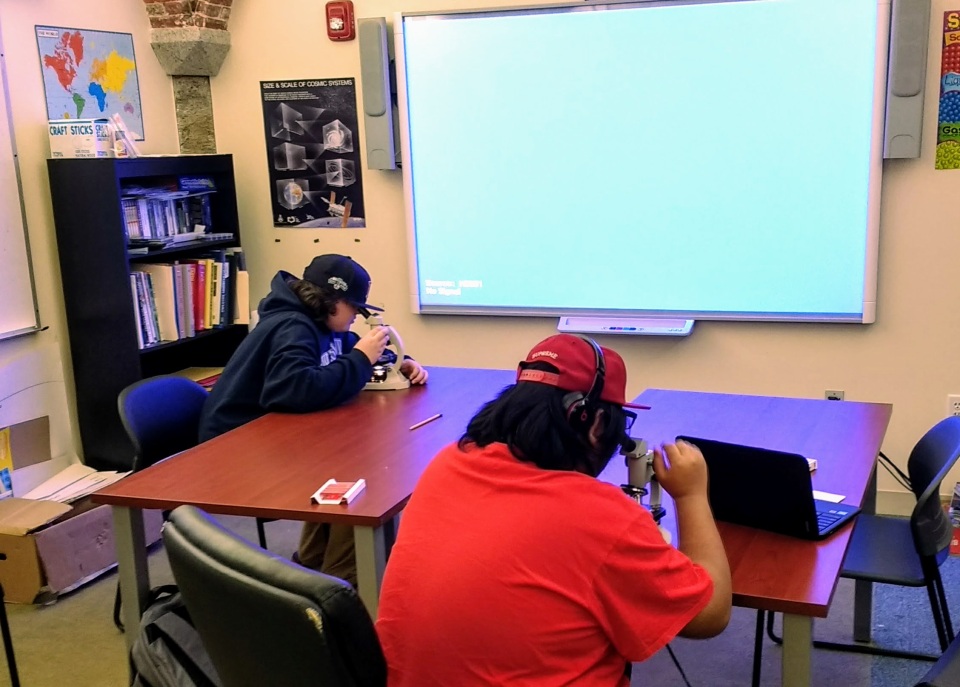 Here we see a student’s point-of-view when discovering the anatomy of a honeybee leg.

Used when a specimen is translucent (some light passes thru it)

The observer sees all the way thru the specimen being studied.

Has more than two sets of lenses.

They sit on on a nosepiece that can revolve

The specimen is placed on the stage of this microscope.

Parts of the microscope

LSM-PE.2.1.2 Gather data, based on observations of cell functions made using a microscope or on cell descriptions obtained from print material, that can be used as evidence to support the claim that there are a variety of cell types.

LSM-PE.2.2.1 Describe, based on observations of cells made using a microscope and on information gathered from print and electronic resources, the internal structures (and the functions of these structures) of different cell types (e.g., amoeba, fungi, plant root, plant leaf, animal muscle, animal skin).

I. Build and demonstrate a hovercraft, or

II. Write a typed report, with a cover page, 3 double-spaced pages of text, and 1 page of citations/references, on what a hovercraft is, how they work, and how they use Newton’s laws of motion, or

III. Create a computer presentation on what a hovercraft is, how they work, and how they use Newton’s laws of motion. Present it to the class.

You may use software such as Microsoft PowerPoint, OpenOffice Impress, Corel Presentations, or any other software you like. All of these programs are very similar. OpenOffice is a package of programs very much like MS Office, but totally free. http://www.openoffice.org/

The entire project may be found in this document: TO BE ADDED

How to build your own hovercraft

Photos from a hovercraft project

Can a hovercraft go up the walls?

A simple to build project

Mod your toy helicopter; turn it into a hovercraft

Hovercraft calculator – used only for building larger hovercraft that can actually carry passengers.

HS-ETS4-5(MA). Explain how a machine converts energy, through mechanical means, to do work. Collect and analyze data to determine the efficiency of simple and complex machines.

HS-PS3-3. Design and evaluate a device that works within given constraints to convert one form of energy into another form of energy.
• Emphasis is on both qualitative and quantitative evaluations of devices.
• Examples of devices could include Rube Goldberg devices, wind turbines, solar cells, solar ovens, and generators.

Appendix VIII Value of Crosscutting Concepts and Nature of Science in Curricula
Cause and Effect: Mechanism and Explanation. Events have causes, sometimes simple, sometimes multifaceted. A major activity of science and engineering is investigating and explaining causal relationships and the mechanisms by which they are mediated. Such mechanisms can then be tested across given contexts and used to predict and explain events in new contexts or design solutions.

College Board Standards for College Success: Science
Standard PS.1 Interactions, Forces and Motion
Changes in the natural and designed world are caused by interactions. Interactions of an object with other objects can be described by forces that can cause a change in motion of one or both interacting objects. Students understand that the term “interaction” is used to describe causality in science: Two objects interact when they act on or influence each other to cause some effect. Students understand that observable objects, changes and events occur in consistent patterns that are comprehensible through careful, systematic investigations.

Next Generation Science Standards: Science – Engineering Design (6-8)
• Evaluate competing design solutions using a systematic process to determine how well they meet the criteria and constraints of the problem.