Most high school physics courses don’t include algebraic analysis of two or three dimensional kinematics and momentum. But these clearly are of great importance.

In a regular, college prep physics high school setting, I can’t imagine skipping 2D physics! Even if we don’t do 2D kinematic equations, we need to cover 2D vectors, and show examples of parabolic motion, and vector components.

Even if we are not doing the math, I want them to see examples of conservation of momentum in two dimensions, like this:

These seem like great apps for teaching 2D kinematics without all of the detailed calculations.

We won’t be able to do three dimensional collision or momentum problem solving, but we can at least introduce the idea of it, and show them why almost every collision and conservation of momentum in the real world is 3D:

First students need to be introduced to the idea that there are more than just two axes (X and Y,) there is a third dimension, Z! 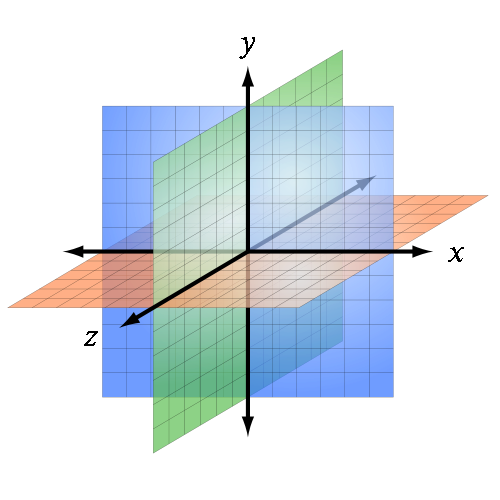 Then we see how we can plot points in three dimensions.

This is the GeoGebra app

Now we realize that the size and motion of any object can be plotted in three dimensions.

The physics of dogs and cats colliding GIF

A practical use of 2D kinematics and conservation of momentum: forensic accident reconstruction.

Practical problem solving: When we do use conservation of momentum to solve a problem? When do we use Newton’s laws of motions?

Sometimes we need to use only one or the other; other times both are equally useful. And on other occasions some problems may require the use of both approaches. Rhett Allain on Wired.com  discusses this in “Physics Face Off: The Momentum Principle Vs Newton’s 2nd Law”

Let’s solve this simple problem two different ways. For the first method, I will use Newton’s Second Law. In one dimension, I can write this as:

Physics Face Off: The Momentum Principle Vs Newton’s 2nd Law

How can we see a bullet’s angular momentum?

Video of a bullet spinning on ice: angular momentum is conserved

Video of a bullet spinning on ice #2 , http://gif-finder.com/bullet-spinning-on-ice/

Myth Statement: A bullet fired into the surface of a frozen lake can spin like a top on impact. Inspired by a viral video.

How does a bullet start spinning to begin with?

Guns are rifled in order to impart spin to a bullet leaving the barrel. 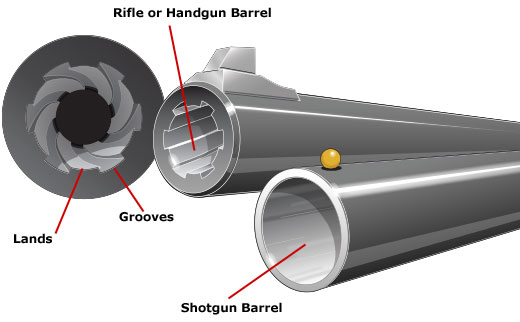 Rifling gives the bullet angular momentum, which stabilizes it
(keeps it from tumbling) 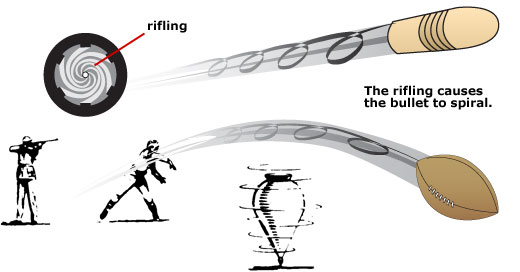 A sudden decision to aim a handgun at some Houston County ice in 2003 yielded a video of spinning bullets that became an Internet sensation and led to a May 18 appearance on cable television’s “Mythbusters” show. The “myth” was born on a winter afternoon when Nate Smith of La Crescent, Minn., along with friends Nate and Andy Van Loon, were shooting bullets from a 9-mm Glock from a hillside toward a patch of ice on the Van Loons’ land near Houston.

“We just went out, not being very smart, and were shooting the ice and watching the pieces of ice fly, and we were recording ourselves,” Smith said. “I remember, after we shot a couple times, wondering what that crackling sound we were hearing was.”

After firing multiple shots, they found the bullets spinning on end on the ice surface, a few feet back from the point of impact. “You could see the trail from where it ricocheted and that’s how we found it,” Smith said. “And it went for about two minutes, so we just filmed that.”

The only explanation Smith could offer is rifling in the gun barrel caused the bullets to spin. Though Smith first put the video on the Internet in 2005, it took off in December 2009 when Smith’s friend Jason Nesbit asked if he could re-post it on YouTube. More than a half-million people have since viewed it.

When questions arose over the validity of the clip, Nesbit asked if he could re-create it on a local frozen lake. “We didn’t think anything would happen, so we said, ‘Sure, go ahead. Do whatever,'” Smith said. But Nesbit went further, sending the video to the “Mythbusters” website, where it caught the attention of the Discovery Channel show’s producers. Smith and Nesbit also were contacted by an Asian television show that paid them a small stipend to use the video. Smith watched May 18 as the “Mythbusters” hosts worked to prove or disprove what he had seen with his own eyes. “Somehow, they get their bullets to just spin like a top,” host Kari Byron said on the show. “Now that sounds like a myth,” co-host Tory Belleci added.

The key element was finding the correct angle to fire the gun into the ice, Belleci said. Too straight would deform the bullet too much to spin, too shallow would send the slug skipping off the ice.

The hosts set up nine 40-by-24-by-10-inch chunks of ice next to each other to replicate the frozen lake. The first shots became embedded in the ice and had no chance to spin. But a bullet was recovered that hadn’t deformed, a cause for cautious optimism. Yet the next several tests failed to yielded a spinning bullet, so the hosts tried firing at an angle to ricochet off a large piece of ice between 2 and 8 feet away from the initial contact point. The hit was clean, but the bullet was gone. Several more tries, several more lost bullets. The hosts decided to try again six months later on an actual frozen lake. But shot after shot and no luck. “This myth sucks,” Belleci said in the blizzard-like conditions.

For the final test, they gave the bullet room to ricochet backwards, as it had on Smith’s outing. After countless attempts, they found the spin they were looking for. It happened again and again, confirming the myth. Smith said the whole experience was somewhat surreal, since he once joked the video might someday make it to “Mythbusters.” “Eight years later, here we are and it was on TV,” he said. But he doesn’t recommend anyone try this at home. “Looking back at it,” he said, “it wasn’t very safe.”

This website is educational. Materials within it are being used in accord with the Fair Use doctrine, as defined by United States law.

§107. Limitations on Exclusive Rights: Fair Use

Notwithstanding the provisions of section 106, the fair use of a copyrighted work, including such use by reproduction in copies or phone records or by any other means specified by that section, for purposes such as criticism, comment, news reporting, teaching (including multiple copies for classroom use), scholarship, or research, is not an infringement of copyright. In determining whether the use made of a work in any particular case is a fair use, the factors to be considered shall include:

If a bullet is fired straight up in the air, will it return to ground level with the same velocity?

Some labs are not safe to perform in schools, but give valuable insight on physics: Thus we may watch a video of such an experiment.

All guns are “rifled” in order to impart spin to a bullet leaving the barrel.

This rifling gives the bullet angular momentum, which stabilizes it (keeps it from tumbling)

How can we see a bullet’s angular momentum?

Video of a bullet spinning on ice: angular momentum is conserved

Video of a bullet spinning on ice #2 , http://gif-finder.com/bullet-spinning-on-ice/

Summary of results: Bullets Fired up

Results are complicated: In most cases the bullet lands with non-lethal velocities, despite confirmed cases to the contrary. How to solve this apparent paradox?

There are really two different cases:

Experiments show that bullets lose (*) spin (and angular momentum) via interactions with the air. Once they lose angular momentum they are no longer spin-stabilized. Without spin-stabilization they tumble, and thus they experience more drag (“air resistance”), slowing them down more.

Bullets fired at an angle can come back down fast enough to kill someone. Experiments show that this allows bullets to keep more of their spin/angular momentum. They stay spin-stabilized for more of the trajectory, and thus keep more of their energy upon landing.

(*) Both momentum and angular momentum are conserved quantities; when we say that an objects loses either, it is because the momentum is actually transferred at a microscopic level to the surrounding molecules of air. See our lesson on momentum.

Analysis: What if the bullet falls without tumbling? How fast would they go

In the original post, there was not sufficient information to say, for example, if the bullet still had kinetic energy from being fired, or if all the speed that was left was its terminal velocity. For the latter case – Assumptions:

1. Take the ideal case (unlikely) that the bullet is falling in a consistently “nose-down” attitude.

Process: We can use the Quadratic drag formula.

ρ = air pressure [This symbol is the Greek letter rho]

A = cross-sectional area of bullet

That comes out to about :

Gun enthusiasts are probably thinking that number is higher than the muzzle velocity of most guns, which means that in this “ideal” scenario, a bullet fired straight up wouldn’t get high enough to attain terminal velocity on the way down.

Much more realistic would be to assume the bullet is more or less sideways on the way down. This will result in a drag coefficient more like 0.6 (a sphere is about 0.5), and a cross-sectional area – very roughly – twice the nose-on area, or say 0.0002052 m2

Plugging those numbers in gives:

How fast does a bullet return to Earth?