Barns Are Painted Red Because

Barns Are Painted Red Because of the Physics of Dying Stars

Have you ever noticed that almost every barn you have ever seen is red? Turns out there’s a reason for that that has to do with the chemistry of dying stars

By Rose Eveleth
SMITHSONIAN.COM   MAY 10, 2013
http://www.smithsonianmag.com/smart-news/barns-are-painted-red-because-of-the-physics-of-dying-stars-58185724/

Have you ever noticed that almost every barn you have ever seen is red? There’s a reason for that, and it has to do with the chemistry of dying stars. Seriously.

Yonatan Zunger is a Google employee who decided to explain this phenomenon on Google+ recently. The simple answer to why barns are painted red is because red paint is cheap. The cheapest paint there is, in fact. But the reason it’s so cheap? Well, that’s the interesting part.

The only thing holding the star up was the energy of the fusion reactions, so as power levels go down, the star starts to shrink.

And as it shrinks, the pressure goes up, and the temperature goes up, until suddenly it hits a temperature where a new reaction can get started. These new reactions give it a big burst of energy, but start to form heavier elements still, and so the cycle gradually repeats, with the star reacting further and further up the periodic table, producing more and more heavy elements as it goes. Until it hits 56. At that point, the reactions simply stop producing energy at all; the star shuts down and collapses without stopping.

As soon as the star hits the 56 nucleon (total number of protons and neutrons in the nucleus) cutoff, it falls apart. It doesn’t make anything heavier than 56. What does this have to do with red paint? Because the star stops at 56, it winds up making a ton of things with 56 neucleons. It makes more 56 nucleon containing things than anything else (aside from the super light stuff in the star that is too light to fuse).

The element that has 56 protons and neutrons in its nucleus in its stable state? Iron. The stuff that makes red paint. And that, Zunger explains, is how the death of a star determines what color barns are painted. 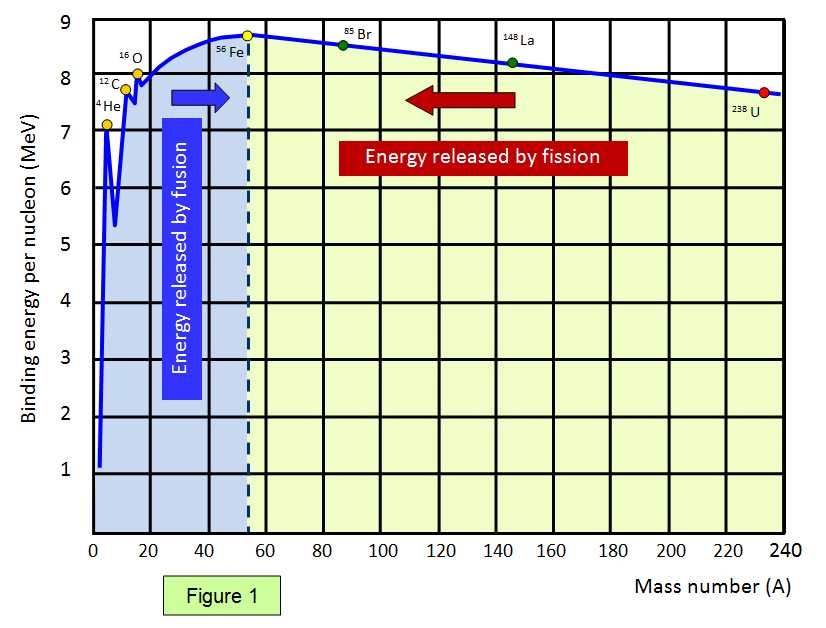 When Hydrogen undergoes fusion, it releases a great deal of energy, which is how/why stars sustain their nuclear reaction. Helium similarly fuses and releases energy.

On the other side of the scale, when Uranium undergoes fission, it also releases a great deal of energy, which is how nuclear (fission) reactors work; other heavy elements like Plutonium also undergoes fission and releases energy.

What about elements in between? If you look at the energy released by fusion or fission for every element (or the binding energy), and plot them by mass number, you get a graph with Iron, and other iron-group isotopes right in the middle, with energies sloping downwards on either side.

As mass number increases from Hydrogen, successive elements release less and less energy when undergoing fusion, which is why stars eventually run out of energy (sometimes spectacularly losing their hydrostatic equilibrium and going Nova);

As mass number decreases from heavy elements, less and less energy is released when undergoing fission, which is why nuclear reactors and (fission) bombs also eventually run out of energy.

Eventually, you end up with Iron and iron-group isotopes that do not release energy undergoing either nuclear fusion, or fission, meaning no self-sustaining nuclear reaction is possible.

All elements in the universe, if undergoing nuclear reaction therefore tend towards iron.

Therefore, for certain death of the universe scenarios, there’ll be a lot of iron, and a smattering of lighter elements that don’t exist in sufficient density to sustain stars; and heavier elements like lead are peculiar in that most radioactive decay chains end up there, hence the corresponding peak to the right of the abundance chart from Dennis Levy’s answer.