Most Earthquakes occur at the boundary between two tectonic plates

One tectonic plate tries to move past the other, but they are locked – until enough stress builds up. Then the plates suddenly slip. This creates the earthquake.

Plates are sliding past each other horizontally, with little to no vertical movement. Both the San Andreas and Anatolian Faults are strike-slip.

Two blocks of crust pull apart, stretching the crust into a valley. The Basin and Range Province in North America and the East African Rift Zone are two well-known regions where normal faults are spreading apart Earth’s crust.

These slide one block of crust on top of another. Commonly found in collisions zones, where tectonic plates push up mountain ranges such as the Himalayas and the Rocky Mountains.

Where do earthquakes originate?

The focus of each earthquake is the place within Earth where the Earthquake originated.

The location directly above the focus is the epicenter. 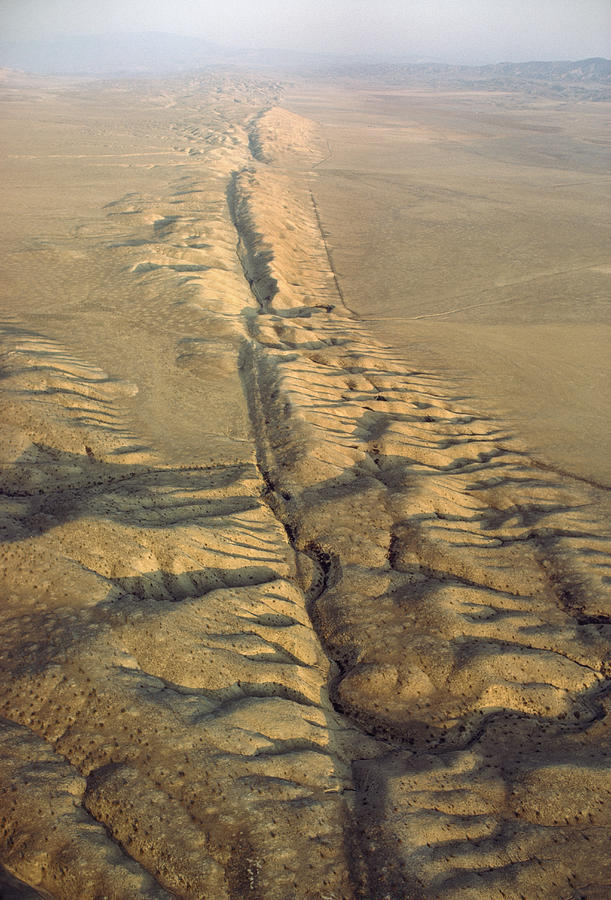 Slippage along the Imperial fault caused an offset in this orange grove, east of calxico CA.

I believe that this is a GIF of a city during the 2011 Fukushima earthquake (April 11) None of these skyscrapers collapsed. The Japanese national government has very strict building codes, and a strict inspection system, which demands that buildings be constructed so as to withstand earthquakes.

Based on chapter Earth Science, 8.1 and 8.2 Tarbuck & Lutgens 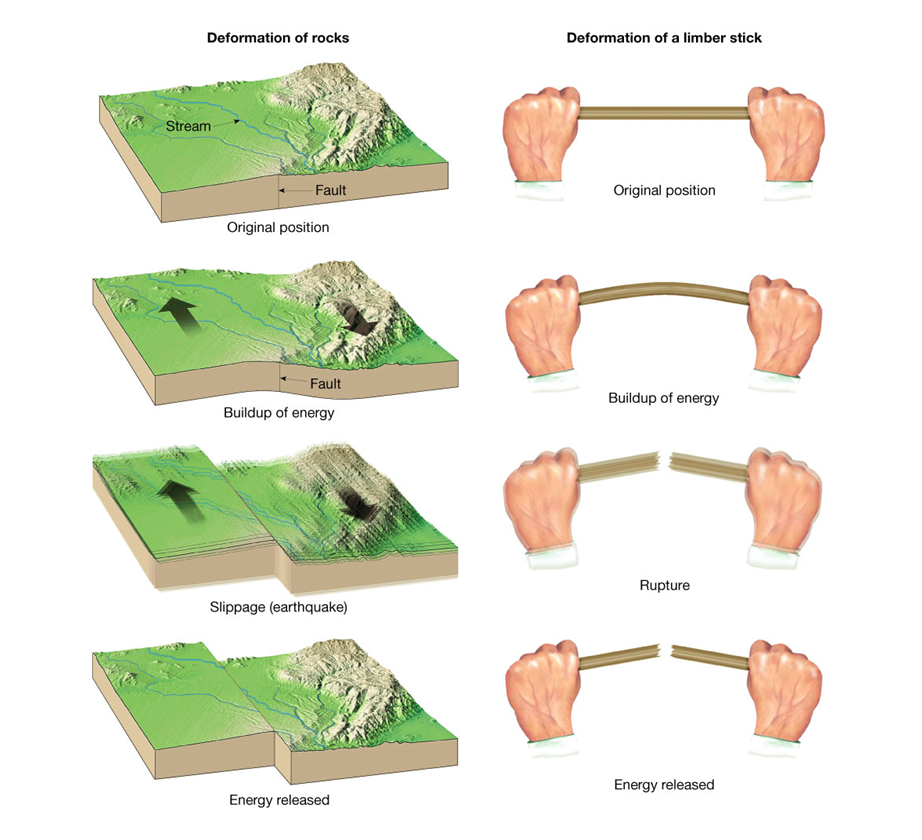 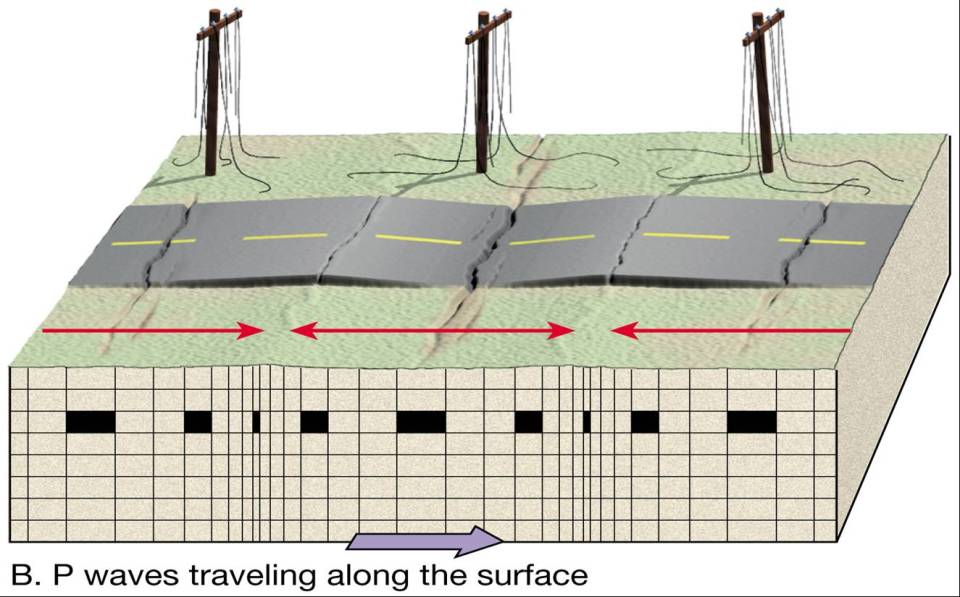 Water waves are an example

What is a seismograph?

This is a seismograph record.

Only 10% of earthquakes are intraplate – these occur in the interior of a tectonic plate, instead of at plate boundaries.

“These earthquakes often occur at the location of ancient failed rifts, because such old structures may present a weakness in the crust where it can easily slip to accommodate regional tectonic strain. Compared to earthquakes near plate boundaries, intraplate earthquakes are not well understood, and the hazards associated with them may be difficult to quantify”

The New Madrid Seismic Zone (pronounced /nuː ˈmædrɪd/), sometimes called the New Madrid Fault Line, is a major seismic zone and a prolific source of intraplate earthquakes (earthquakes within a tectonic plate) in the southern and midwestern United States, stretching to the southwest from New Madrid, Missouri.

he New Madrid fault system was responsible for the 1811–12 New Madrid earthquakes and may have the potential to produce large earthquakes in the future. Since 1812, frequent smaller earthquakes have been recorded in the area.
Earthquakes that occur in the New Madrid Seismic Zone potentially threaten parts of seven American states: Illinois, Indiana, Missouri, Arkansas, Kentucky, Tennessee and Mississippi.

The US Geological Survey has been researching this issue: http://earthquake.usgs.gov/research/induced/

“Drillers inject high-pressure fluids into a hydraulic fracturing well, making slight fissures in the shale that release natural gas. The resulting briny wastewater flows back up to the surface, where it is transported by truck or pipeline to nearby injection wells. The liquid is then pumped down the injection wells to a layer of deep, porous rock, often sandstone. Once there, it can flow in every direction, including into and around faults. Added pressure and lubrication can cause normally stable faults to slip, unleashing earthquakes.”

Time magazine has an article on the major increase in earthquakes caused by fracking.
http://time.com/21413/frack-rattle-and-roll-did-hydraulic-fracturing-play-a-role-in-ohio-quakes/

“Yes, it’s true. Earthquakes really do occur on a regular basis in New England. Notable examples of earthquakes that caused damage in New England and adjacent areas are: the earthquake off the coast of Cape Ann, MA in 1755; two earthquakes near Ossipee, NH in 1940; and an earthquake near New York City in 1884.”

“In spite of this regular occurrence of earthquakes in the northeastern United States, most people living in New England probably think of places like California or Japan, rather than New England, when they hear the word “earthquake.” While Californians have learned to expect earthquakes, residents of New England more likely consider the ground beneath their feet to be “solid as a rock.” ”

“Nonetheless, the record of earthquake activity in the United States shows that, while the highest level of activity is, of course, in the western part of the country, earthquakes are quite common in many areas of the eastern United States, including New England.”

…a commonly accepted explanation for the cause of earthquakes in the Northeast is that “ancient zones of weakness” are being reactivated in the present-day stress field. In this model, preexisting faults formed during ancient geological episodes persist in the intraplate crust… [and so] earthquakes occur when the present-day stress is released along these zones of weakness….

While this concept is commonly assumed to be valid, in reality the identification of individual active geologic features has proven to be quite difficult. Unlike the situation for many plate boundary earthquakes, it is not at all clear whether faults mapped at the earth’s surface in the Northeast are the same faults along which the earthquakes are occurring.

from Quakes in New England

California and The Big One

Yes, we do expect “the Big One” to hit California. But no, California will not sink into the ocean. There is literally no chasm for California to sink in to.

Q: Will California eventually fall off into the ocean?

Although it’s a familiar plot device of criminal masterminds to both superheroes and super-agents, the answer is no. The San Andreas Fault System, for example, which crosses California from the Salton Sea in the south to Cape Mendocino in the north, is the boundary between the Pacific Plate and North American Plate.

The Pacific Plate is moving in a northwest direction with respect to the North American Plate at approximately 46 millimeters per year, about the rate your fingernails grow. The strike-slip earthquakes on the San Andreas Fault are a result of this plate motion.

The plates are moving horizontally past one another, so California will not fall into the ocean but instead L.A. will one day mosey on passed San Francisco one day.
– Steven Sobieszczyk, USGS Hydrologist

Compare pre- and post-event imagery to explore damage caused by the Nepal Earthquake. Click the bookmarks below to zoom in and view areas before and after the April 25th earthquake. Post earthquake imagery provided by Airbus Defense and Space
http://www.esri.com/services/disaster-response/earthquakes/nepal-earthquake-swipe-map