What is a crystal?

Etymology (where does the word come from) – Crystal is derived from the Ancient Greek word κρύσταλλος (krustallos), which means “rock-crystal” or “ice”.

A crystal is solid material, in which the atoms, molecules, or ions are arranged in an orderly repeating pattern.  This pattern comes is made from a cell of atoms, repeated over and over again.

Here is a pattern of ceramic tiles: (http://www.bestbuytoday.com/mosaic-patterns/)

The same word – cell – has different meanings depending on the context

What is a “cell“?  It means “little room”. In architecture, a cell is a room (like in an office, or prison.)

In computer programs, a cell is place in a Spreadsheet program where data is stored

(The image below shows many cells in Microsoft Office Excel.)

When many cells are put together, they create tissues, e.g. skin tissue, stomach tissue. Here you can see cardiac (heart) cells.

When many cells are put together, they can create crystals.

On the left: Microscopic structure of a halite crystal. (Purple is sodium ion, green is chlorine ion.)  This crystal is so tiny, that it would take 10,000 of them to make on grain of salt!

On the right is a visible chunk of salt, an inch wide, which would contain millions of units!

As you can see, crystal patterns extend in all three spatial dimensions: left to right, front to back, top to bottom

A change in shape, means a total change in the way that the object behaves!
These are carbon atoms, and in this pattern they make diamonds.

These are carbon atoms, and in this pattern they make thin sheets that slide off of each other: graphite (“pencil lead”)

Each of these spheres is a single atom

So tiny that a million of them on top of each other, and in front of each other. would only amount to a speck of crystal dust

If you have dozens of these cells connecting, you get a pattern that looks like this: 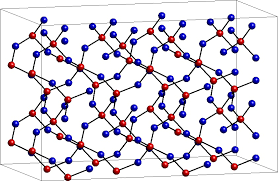 If you have millions of these connected together, then you can make visible quartz crystals:

B. formed through geological processes

C. has a characteristic chemical composition,

D. has a crystalline structure

II. Most common minerals of the Earth’s crust

Most common minerals in the human body

Types of Rocks and Minerals

IV. Properties and identification of Minerals

E. Hardness – resistance of the mineral to being scratched

F. Cleavage – the way a mineral tends to cleave (break) along flat, even surfaces

1. Minerals naturally cleave along the lines of least resistance,  along their crystal structure

1. Some minerals don’t even fracture into large pieces, but instead break into fibers

H. Density – How much mass is in a given volume

Example: Copper density = 9.0 grams / cubic centimeter = 9.0 gm / cm 3
Note the abbreviations. We will always use them, instead of writing out the units.

Most minerals are rocky, density between 2 to 5 gm/cm 3