Review: There are three basic types of rocks – sedimentary, igneous, and metamorphic.

The Earth’s rocks do not stay the same forever. They are continually changing because of weathering, erosion and large earth movements. Rocks are gradually recycled and changed over millions of years.

For example, sedimentary rocks can be changed into metamorphic rocks. These then can be weathered, eroded, and the pieces transported away. The pieces could be deposited in a lake or sea, eventually forming new sedimentary rock. Many routes through the rock cycle are possible, shown as arrows on the following diagram. 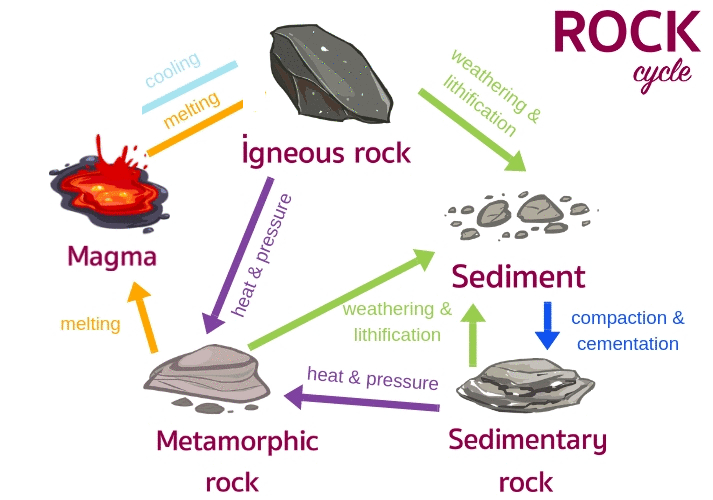 Three main processes change rocks from one form to another

One major process is cooling and crystallization

Deep within the Earth, high temperature can melt rocks into magma.

Later that magma can move to a different, cooler region.

If the magma cools slowly then crystals will form.

A mass of these interlocking crystals is called igneous rock

Say, what exactly does the crystallization process look like?

First, you might want to remind yourself what a crystal is! Done that? Good – so in this next GIF we see hot magma, deep in the Earth, cooling off.

Notice that some of the liquid rock comes together to form crystals, floating in hot yellow magma. But then some of the rest of that magma cools into a different kind of crystal.

Finally, the leftover magma around these cools and solidifies, locking all of these tiny crystals together.

This animation is from Classzone: Igneous Rock Crystallization Animations., which is a part of Exploring Earth flash visualizations.  from McDougal Little.

Another major process is weathering and erosion

Water, wind, ice, and even plants and animals all act to wear down rocks. Over time they can break larger rocks into sediments. Rocks break down by the process called weathering. Moving water, wind, and glaciers then carry these pieces from one place to another. This is called erosion.

The sediments are eventually dropped, or deposited, somewhere. This process is called sedimentation. The sediments may then be compacted and cemented together. This forms a sedimentary rock. This whole process can take hundreds or thousands of years.

And the third major process is metamorphism

The cycle has no beginning or end

The processes involved in the rock cycle take place over hundreds, thousands, or even millions of years. Even though for us rocks are solid and unchanging, they slowly change all the time.

Many different kinds of metamorphic rock

How do they all form? Different kinds can form when they are made with different ingredients (obviously!  Maybe some places have more iron, others have more silicon, etc.) But ingredients aren’t everything – the environment matters as well. This graphic shows us that the type of metamorphic rock made depends on the temperature that it is made at, and the pressure it is under.

This beautiful infographic is quite useful