Yellowstone National Park – the first national park in the world – is a national park located primarily in the U.S. state of Wyoming, extending into Montana and Idaho.

Painting of Yellowstone by Heinrich C. Berann.
.Aerial view of the entire park from the north, looking south.

As a national park it was established by the U.S. Congress and signed into law by President Ulysses S. Grant in 1872.

It known for its wildlife and its many geothermal features, especially Old Faithful Geyser.

Native Americans have lived in the Yellowstone region for at least 11,000 years. The region was bypassed during the Lewis and Clark Expedition in the early 19th century. Aside from visits by mountain men during the early-to-mid-19th century, organized exploration did not begin until the late 1860s. The U.S. Army was commissioned to oversee the park just after its establishment. In 1917, administration of the park was transferred to the National Park Service.

It is centered over the Yellowstone Caldera, the largest supervolcano on the continent. The caldera is considered an active volcano. It has erupted with tremendous force several times in the last two million years. Half of the world’s geothermal features are in Yellowstone, fueled by this ongoing volcanism.

Lava flows and rocks from volcanic eruptions cover most of the land area of Yellowstone. 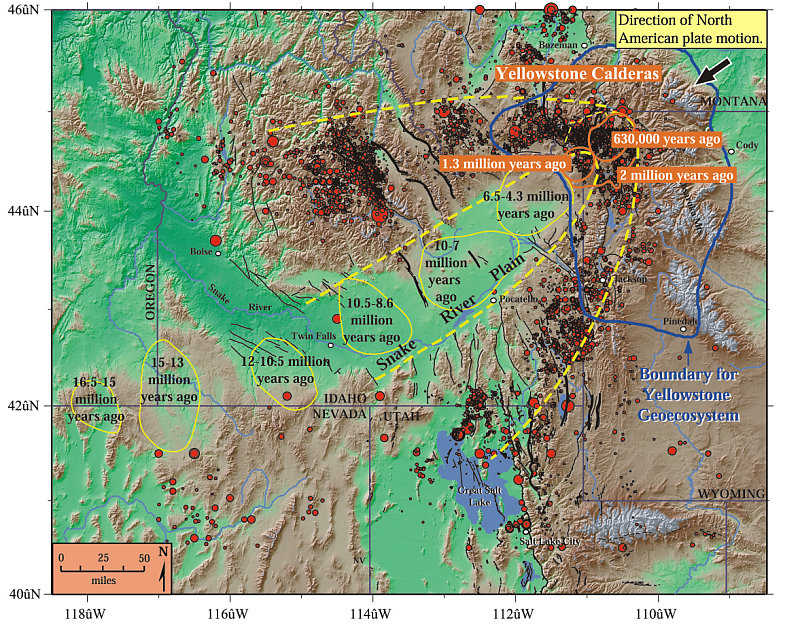 Image by the National Park Service.

The term “supervolcano” implies a volcanic center that has had an eruption of magnitude 8 on the Volcano Explosivity Index (VEI), meaning the measured deposits for that eruption is greater than 1,000 cubic kilometers (240 cubic miles)….Volcanoes that produced exceedingly voluminous pyroclastic eruptions and formed large calderas in the past 2 million years would include Yellowstone, Long Valley in eastern California, Toba in Indonesia, and Taupo in New Zealand. Other “supervolcanoes” would likely include the large caldera volcanoes of Japan, Indonesia, and South America. The most recent supervolcanic eruption on Earth occurred 27,000 years ago at Taupo located at the center of New Zealand’s north island.

…In 2005, BBC and the Discovery Channel produced a docudrama and documentary about Yellowstone called Supervolcano. Below, Yellowstone Volcano Observatory scientists answer questions that arose after this program aired that relate to supervolcanoes, volcanic hazards, and Yellowstone.

The docudrama Supervolcano dramatically explores the impact of a large caldera-forming eruption at Yellowstone. The scale of the portrayed eruption is similar to the eruption of the Huckleberry Ridge Tuff at Yellowstone 2.1 million years ago. The movie is realistic insofar as depicting what could happen if an eruption of this magnitude were to occur again. Although the drama is set in the future, it does an acceptable job of addressing some of the issues scientists would grapple with if Yellowstone showed signs of an impending eruption.

Yellowstone, one of the world’s largest active volcanic systems, has produced several giant volcanic eruptions in the past few million years, as well as many smaller eruptions and steam explosions. Although no eruptions of lava or volcanic ash have occurred for many thousands of years, future eruptions are likely. In the next few hundred years, hazards will most probably be limited to ongoing geyser and hot-spring activity, occasional steam explosions, and moderate to large earthquakes. To better understand Yellowstone’s volcano and earthquake hazards and to help protect the public, the U.S. Geological Survey, the University of Utah, and Yellowstone National Park formed the Yellowstone Volcano Observatory, which continuously monitors activity in the region….

The Yellowstone Hotspot: Plume or Not? Matthew J. Fouch*
http://geology.gsapubs.org/content/40/5/479.full