How to calculate the net force on an object, and draw free body diagrams.

A free body diagram shows all forces acting on an object.

We draw forces as arrows.

Arrow shows the relative magnitude (strength) and direction of a force.

So each arrow is a vector.

Keep it simple. Don’t draw the object itself.  Just draw a small box, or a big dot  (●)

Here’s a free body diagram of a child being pulled on a sled, overlaid on an actual photo.

F kf = force of kinetic friction (acting against the pull) 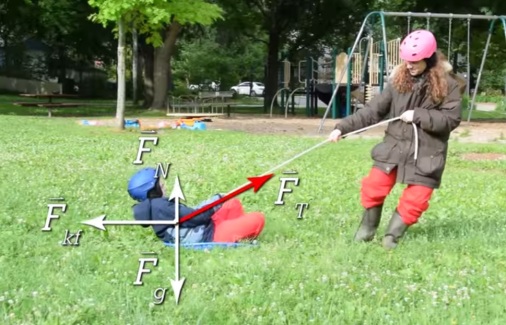 Here’s your lesson on
Drawing Free Body Diagrams. From PhysicsClassroom.com

Physics of a falling Slinky

The bottom of the Slinky remains at the same position because upwards-pulling tension in the spring cancels out the downwards-pulling force of gravity.

The center of gravity of the Slinky falls with the same gravitational acceleration experienced by any dropped object.