9th grade physics (to be added)

New resources to look at

Introduction: How much heat energy is in sunlight? View this clip from “James May’s Big Ideas.” This parabolic mirror reflects infrared, visible and UV light energy from the sun, onto a focal point, producing about 1000 watts of power/square meter.

At the end of this chapter you should be able to answer MCAS heat problems.

These images & animations will help you better understand the text.

When the temperature of an object increases, the particles vibrate more rapidly, rotate faster, and move sideways with greater speed.

As water in a pot is heated, its molecules move with greater speed, reflected by a higher thermometer reading.

If a sample of water is placed in the freezer, its molecules move slower… reflected by a lower thermometer reading.

Translational motion of atoms in a gas or liquid:

What is temperature? Colloquial definition: The degree of hotness or coldness

Scientific definition: a measure of the average KE (kinetic energy) of the particles, in a sample of matter.

3. How does heat transfer from your mouth to a thermometer?

4. What is thermal equilibrium?

There are three temperature scales

Fahrenheit
Water freezes at 32 degrees and boils at 212 degrees
There are 180 Fahrenheit degrees between the freezing point and the boiling point.

Celsius
Water freezes at 0 °C and boils at 100 °C.
There are 1o0 C degrees between the freezing point and the boiling point.
Therefore C degrees must be larger than F degrees.
Most of the world uses this scale.

Kelvin
Kelvin scale is useful because it starts at absolute zero.
A Kelvin temperature measures the actual energy of atoms – relative to zero energy.
There are 1o0 K degrees between the freezing point and the boiling point.
They are the same size as the Celsius degree.
Water freezes at 273K and boils at 373K.

Another way of viewing the 3 temperature scales. 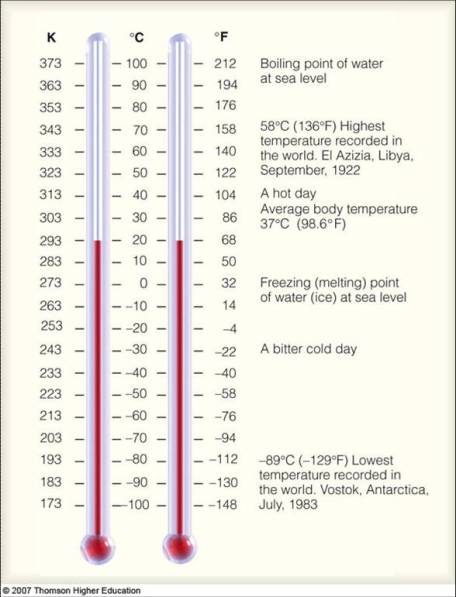 9. What is a normal body temperature in all 3 systems?

10. Does 0 degrees have any special meaning in the F system? C system? K system?

Three mechanisms of energy transfer as heat are conduction, convection, and radiation

Conduction
Touch a metal spoon that was left in a hot pan. Painful! Conduction is the transfer of heat, through matter: molecule energy is transferred – by collisions – from one molecule to another.

Metals are good conductors! (Don’t touch hot metal!) But air  is a poor conductor of heat. That’s why our winter jackets are filled with fluffy stuffing: the fluffy fibers in our jacket have only one job; trap air. The trapped air does the insulating!

Here are some metal atoms – notice how they vibrate, and transfer heat from one to the next: That is heat conduction. Hmm – metals atoms are also good at conducting electricity.

Look closely: The atoms are not touching each other.
Each metal atom has electrons, and a few of the electrons are free. They can leave their parent atom, and move around to nearby atoms. It becomes a sea of electrons, moving freely in a solid chunk of metal.
These free electrons transfer energy much faster than just vibrations.
That’s why metal is better at conducting heat than non-metals.

11. How is heat conducted through a solid object?

Convection
Here we see a flame heating up a pot of water.
Heated water expands & becomes less dense.
So the hot water (red) rises.
Eventually that water becomes cooler (bluer)
Cooler water contracts & becomes more dense
So the cooler water falls, and then eventually gets heated again.
The produces a cycle of motion that transfers heat.

This is how heat is transferred in our atmosphere:
Hot air rises, cool air descends. 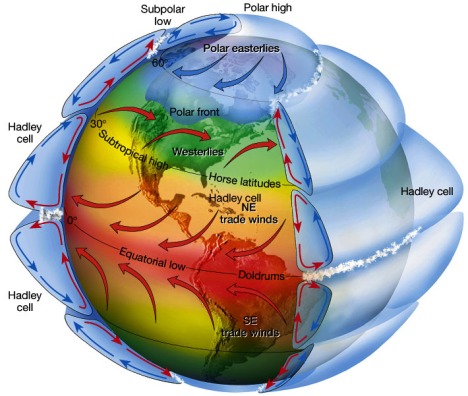 Convection also takes place in solids, such as Earth’s mantle.
Yup, Earth’s mantle behaves like a fluid – over a long period of time.

12. How does convection transfer heat in the atmosphere? Within the Earth?

Radiation travels out in all directions from its source. Unlike conduction and convection,which need material to travel through, radiant energy can travel through the vacuum of space. Solar energy reaches Earth by radiation.

Different materials need a different amount of heat, to rise in temperature.

Specific heat = amount of heat needed to raise the temp of 1 kg of a material, by 1 degree ( C or K)

For reference, she is holding a 1 kilogram weight.

(This could also be in calories, instead of joules)

Example specific heat capacities
(What are the units? Read the vertical axis)

Matter with high specific heat capacities take a lot of heat energy to heat up – and so need a long time to cool down.

How much heat energy is needed to raise some material, by a certain number of degrees?

The specific heat of gold is over 30 times smaller than that of water.
So with the same amount of added heat, a kg of gold will go from 20°C to 90°C
While a kg of water will only go from 20°C to 22°C.

Why such a big difference? 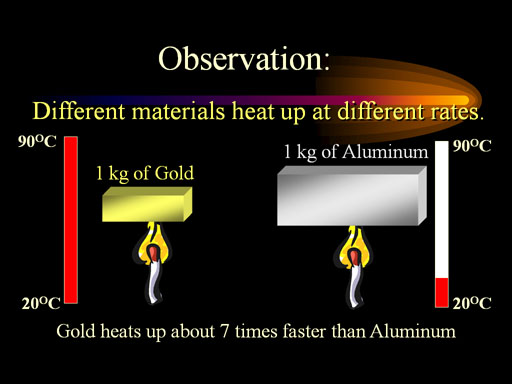 Each material have a different rate of heating. Here we see that gold heats up 7 times faster than aluminum.
Everything has its own specific heat (aka heat capacity). A
luminum’s specific heat is 0.216 cal/g·°C, 7 times more than that of gold (0.031 cal/g·°C).

Carefully study the example problem on page 326.
Following this same format, solve problems #1, 2 and 3.
Write your answers clearly and neatly.

At the end of this chapter you should be able to answer MCAS heat problems.

Lectures on Heat and Thermodynamics, Michael Fowler, University of Virginia

Museum of Unworkable Devices: No violations of the 2nd law

Maxwell’s Demon and the Entropy of Information

7.MS-PS3-5. Present evidence to support the claim that when the kinetic energy of an object changes, energy is transferred to or from the object. Examples of empirical evidence could include an inventory or other representation of the energy before and after the transfer in the form of temperature changes or motion of an object.

7.MS-PS3-6(MA). Use a model to explain how thermal energy is transferred out of hotter regions or objects and into colder ones by convection, conduction, and radiation.

8.MS-PS1-4. Develop a model that describes and predicts changes in particle motion, relative spatial arrangement, temperature, and state of a pure substance when thermal energy is added or removed. Emphasis is on qualitative molecular-level models of solids, liquids, and gases to show that adding or removing thermal energy increases or decreases kinetic energy of the particles until a change of state occurs

HS-PS3-4a. Provide evidence that when two objects of different temperature are in thermal contact within a closed system, the transfer of thermal energy from higher temperature objects to lower-temperature objects results in thermal equilibrium, or a more uniform energy distribution among the objects and that temperature changes
necessary to achieve thermal equilibrium depend on the specific heat values of the two substances. Energy changes should be described both quantitatively in a single phase (Q =m·c·∆T) and conceptually either in a single phase or during a phase change.