Free Fall – how fast does an object move?

The change in speed, each second, is the same.

That’s true whether the ball is going upward or downward.

Acceleration of Earth’s gravity here is about 10 m/s2

Be careful: this value of “g’ isn’t a law of nature. This number changes on all worlds, moons, comets, etc.

So if you drop any object, as long as there is no air resistance, then all objects accelerate down at 10 m/s, per second… adding another 10 m/s every second.

Let’s look at an apple and a feather both dropped at the same time – in a vacuum.

If you throw an object up into the air, then what happens?

When the upward speed reaches zero,

then gravity begins to increase the downward speed, as shown here:

How far does it fall?

Here is total distance moved by a freely falling object, dropped from erst.

Note: Each second it falls even further than it did the previous second.

What formula do we use to calculate how far it falls? 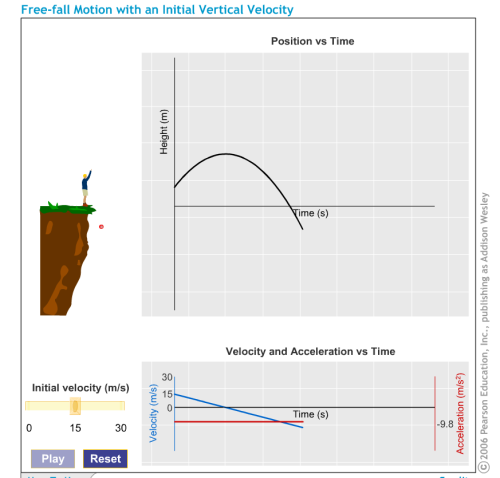 (A) You may choose ground level to be at Y = 0. Set the Y-axis as positive upwards.
The further you go from the ground, the greater the Y value will be.
So g must be -9.8 m/s2.
Vo must be a positive number in this coordinate system, because increasing distance from the ground is positive along the Y-axis.

For both cases, let’s follow the ball as it is thrown upwards, from the ground. Our upward throw has an initial velocityof 15 m.s.

Keep track of time, acceleration of gravity, and the ball’s instantaneous velocity, at a number of points.

2016 Massachusetts Science and Technology/Engineering Standards
HS-PS2-10(MA). Use free-body force diagrams, algebraic expressions, and Newton’s laws of motion to predict changes to velocity and acceleration for an object moving in one dimension in various situations.

A Framework for K-12 Science Education: Practices, Crosscutting Concepts, and Core Ideas (2012)
PS2.A Forces and motion. How can one predict an object’s continued motion, changes in motion, or stability?

5.1e An object in free fall accelerates due to the force of gravity.* Friction and other
forces cause the actual motion of a falling object to deviate from its theoretical motion.