What is time? Where does time come from?

In what way is time really something objective, something actually out there? In what ways is time not real, but just a way that humans use to describe our perception of the universe?

We’ve also learned that a deeper understanding of the nature of time may rely on understanding modern physics especially quantum mechanics .

“In summary, time is not an illusion, but the flow of time is. So is change. In spacetime, the future exists and the past doesn’t disappear. When we combine Einstein’s classical spacetime with quantum mechanics, we get quantum parallel universes as we saw in Chapter 8. This means that there are many pasts and futures that are all real-but this in no way diminishes the unchanging mathematical nature of the full physical reality.

This is how I see it. However, although this idea of an unchanging reality is venerable and dates back to Einstein, it remains controversial and subject to vibrant scientific debate, with scientists I greatly respect expressing a spectrum of views. For example, in his book The Hidden Reality, Brian Greene expresses unease toward letting go of the notions that change and creation are fundamental, writing, “I’m partial to there being a process, however tentative…that we can imagine generating the multiverse.”

Lee Smolin goes further in his book Time Reborn, arguing that not only is change real, but that indeed time may be the only thing that’s real. At the other end of the spectrum, Julian Barbour argues in his book The End of Time not only that change is illusory, but that one can even describe physical reality without introducing the time concept at all.”

― Max Tegmark, Our Mathematical Universe: My Quest for the Ultimate Nature of Reality

entropy is the amount of disorder (in a gas, a liquid, objects in a room, etc) 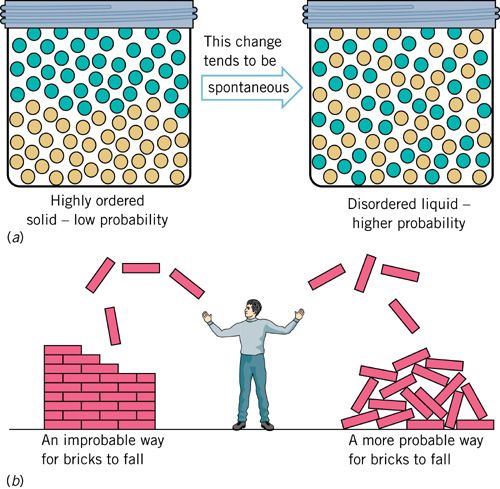 Entropy really measures the dispersal of energy: how much energy is spread out in a particular process

We know from everyday experience how energy spreads out – and how it doesn’t. This ice melting looks normal.

Yet Newton’s laws of motion do allow the below event to occur, as well:

Water molecules move randomly in water – so by sheer chance, couldn’t they all come together to spontaneously form ice cubes? Yet this obviously never happens.

The following is from: Entropy Explained, With Sheep: From Melting Ice Cubes to a Mystery About Time, by Aatish Bhatia, https://aatishb.github.io/entropy/

Imagine you could zoom in and see the atoms and molecules in a melting cube of ice. If you could film the motion of any particle, and then play that film back in reverse, what you’d see would still be perfectly consistent with the laws of physics. It wouldn’t look unusual at all.

The movements of the atoms and molecules in the first gif are every bit as ‘legal’ (in the court of physical law) as those in the second gif.

So why is the first gif an everyday occurrence, while the reverse one impossible?

This isn’t just about ice cubes. Imagine you dropped an egg on the floor. Every atomic motion taking place in this messy event could have happened in reverse. The pieces of the egg could theoretically start on the floor, hurtle towards each other, reforming into an egg as it lifts off the ground, travel up through the air, and arrive gently in your hand. The movement of every atom in this time-reversed egg would still be perfectly consistent with the laws of physics. And yet, this never happens.

So there’s a deep mystery lurking behind our seemingly simple ice-melting puzzle. At the level of microscopic particles, nature doesn’t have a preference for doing things in one direction versus doing them in reverse. The atomic world is a two-way street.

And yet, for some reason, when we get to large collections of atoms, a one-way street emerges for the direction in which events take place, even though this wasn’t present at the microscopic level. An arrow of time emerges.

The arrow of time

Why does time never go backward? The answer apparently lies not in the laws of nature, which hardly distinguish between past and future, but in the conditions prevailing in the early universe.

Is the Universe Leaking Energy? Total energy must be conserved. Every student of physics learns this fundamental law. The trouble is, it does not apply to the universe as a whole. By Tamara M. Davis

HS-PS3-4a. Provide evidence that when two objects of different temperature are in thermal contact within a closed system, the transfer of thermal energy from higher temperature objects to lower-temperature objects results in thermal equilibrium, or a more uniform energy distribution among the objects and that temperature changes
necessary to achieve thermal equilibrium depend on the specific heat values of the two substances. Energy changes should be described both quantitatively in a single phase (Q =m·c·∆T) and conceptually either in a single phase or during a phase change.

HS-PS3-4. Plan and conduct an investigation to provide evidence that the transfer of thermal energy when two components of different temperature are combined within a closed system results in a more uniform energy distribution among the components in the system (second law of thermodynamics).

Energy cannot be created or destroyed—only moves between one place and another place, between objects and/or fields, or between systems. (HS-PS3-2)

7.B.2.1: The student is able to connect qualitatively the second law of thermodynamics in terms of the state function called entropy and how it (entropy) behaves in reversible and irreversible processes. [SP 7.1]
– AP Physics Course and Exam Description

“World in Process” John A. Jungerman Description of the ideas of modern physics and cosmology; also connects those ideas to process thought.

“Travels in Four Dimensions: The Enigmas of Space and Time” Robin Le Poidevin

“Time and History: Proceeding of the 28 International Ludwig Wittgenstein Symposium” by Friedrich Stadler