A scientific model let us investigate something that seems complex using simpler ideas.

Models can be physical, conceptual or mathematical. Let’s look at models in all these categories.

This is the simplest, most literal type of model.

Scale models are miniature versions of what they are representing.

This is an animated physical model of how tectonic plate motion can create mountain ranges.

Here we see a model of how a steam engine works. 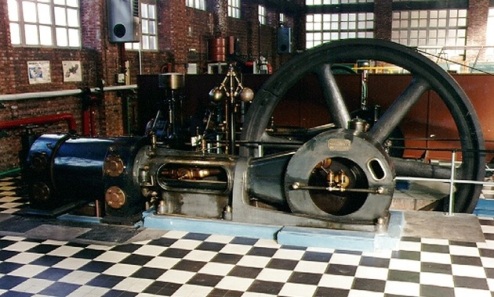 This is a simplified mechanical physical model of part of our solar system.

Helps us explain how a system works by showing how ideas are connected to each other.

They do not show what something physically looks like.

How do our minds start with remembering facts, yet then build towards being able to create, evaluate and analyze?

Note that it doesn’t show the brain (where the mind resides) – there is nothing physical about this model.

Mathematical models translate ideas about how the world works into a mathematical relationship.

Why do this? Math is concise. We can cover many millions of different situations – with just one formula!

Math is logical: It follows step-by-step rules, so anyone who learns the rules will get the right answer.

Once someone creates a math model, we can program it into a computer to do the math for us. That can let us simulate reality (to some degree) and learn how systems work.

Example: Newton’s second law of motion. It says that if you put a force (F) on any object with mass (M), then that object experiences an acceleration (A).

The relationship is is shown below, and can be used to analyze the motion of anything in the universe!

With Newton’s second law we can mathematically model forces and accelerations on anything, such as forces on roller coaster cars.

More than one model of a phenomenon is possible

Although there is only one reality, there is usually more than one way to model reality.

Even something as simple as “understand the land outside your window” can be modeled, in different ways.

In this example we see the same land understood: 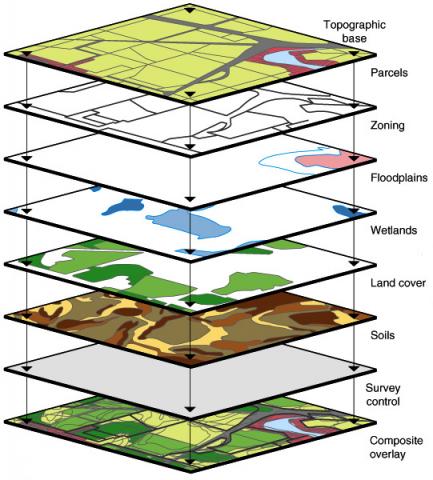 How models are used in engineering

We can analyze a system to see under what conditions flaws might develop.

We can test possible solutions to a problem.

We can visualize and refine a design,

from the New York Times article, Genoa Bridge Collapse: The Road to Tragedy. 9/6/2018

All models contain approximations and assumptions.

They are only valid under certain conditions.

If we use these models outside of those conditions then then their predictions may be wrong.

So it is important to recognize a model’s limitations.

Should include a causal mechanism

Should be falsifiable – must be a way of testing whether it is false. See Scientific models are falsifiable.

Should be able to generate predictions. If it can’t predict something, then it has no use.

Should be accepted only if its predictions are observed to be correct.

See Scientific models are tested against the real world.

Should tie together many seemingly isolated ideas into one larger, coherent picture. See Science is a collective enterprise.

Even Theories Change: Understanding Science (UC Museum of Paleontology of the University of California at Berkeley)

A model world In economics, climate science and public health, computer models help us decide how to act. But can we trust them? Aeon.Com

What is mathematical modeling? By Vahid Dabbaghian

From Appendix F, Science and Engineering Practices in the NGSS

Modeling can begin in the earliest grades, with students’ models progressing from concrete “pictures” and/or physical scale models (e.g., a toy car) to more abstract representations of relevant relationships in later grades, such as a diagram representing forces on a particular object in a system. (NRC Framework, 2012, p. 58)

Modeling in 6–8
This builds on K–5 experiences and progresses to developing, using, and revising models to describe, test, and predict more abstract phenomena and design systems.
* Evaluate limitations of a model for a proposed object or tool.
* Develop or modify a model—based on evidence – to match what happens if a variable or component of a system is changed.
* Use and/or develop a model of simple systems with uncertain and less predictable factors.
* Develop and/or revise a model to show the relationships among variables, including those that are not observable but predict observable phenomena.
* Develop and/or use a model to predict and/or describe phenomena.
* Develop a model to describe unobservable mechanisms.
* Develop and/or use a model to generate data to test ideas about phenomena in natural or designed systems, including those representing inputs and outputs, and those at unobservable scales.

High School: Modeling in 9–12
This builds on K–8 experiences and progresses to using, synthesizing, and developing models to predict and show relationships among variables between systems and their components in the natural and designed world(s).
* Evaluate merits and limitations of two different models of the same proposed tool, process, mechanism, or system in order to select or revise a model that best fits the evidence or design criteria.
* Design a test of a model to ascertain its reliability.
* Develop, revise, and/or use a model based on evidence to illustrate and/or predict the relationships between systems or between components of a system.
* Develop and/or use multiple types of models to provide mechanistic accounts and/or predict phenomena, and move flexibly between model types based on merits and limitations.
* Use a model to provide mechanistic accounts of phenomena.
* Develop a complex model that allows for manipulation and testing of a proposed process or system.
* Develop and/or use a model (including mathematical and computational) to generate data to support explanations, predict