What are vectors? How do we use them?

Here a PowerPoint presentation on vectors and projectile motion.

Because vectors are quantities that have direction as well as magnitude, they must be added in a special way. Here we will deal mainly with displacement vectors, for which we now use the symbol and velocity vectors, But the results will apply for other vectors we encounter later.

Subtraction of Vectors, and Multiplication of a Vector by a Scalar 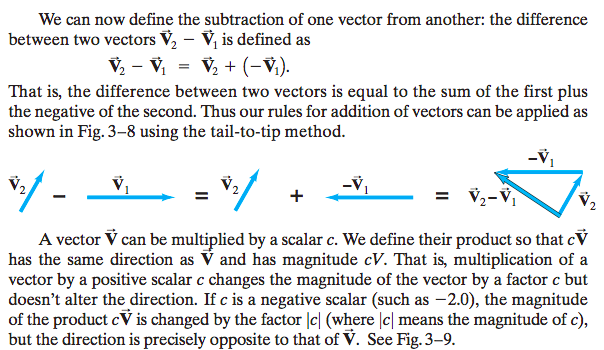 Adding vectors graphically using a ruler and protractor is often not sufficiently accurate and is not useful for vectors in three dimensions.

We discuss now a more powerful and precise method for adding vectors. But do not forget graphical methods—they are useful for visualizing, for checking your math, and thus for getting the correct result.

Consider first a vector that lies in a particular plane. It can be expressed as the sum of two other vectors, called the components of the original vector.

The components are usually chosen to be along two perpendicular directions, such as
the x and y axes. The process of finding the components is known as resolving the vector into its components.

An example is shown in Fig. 3–10; the vector could be a displacement vector that points at an angle north of east, where we have chosen the positive x axis to be to the east and the positive y axis north.

This vector is resolved into its x and y components by drawing dashed lines (AB and AC) out from the tip (A) of the vector, making them perpendicular to the x and y axes.

Then the lines 0B and 0C represent the x and y components of respectively, as shown in Fig. 3–10b.

As can be seen in Fig. 3–10, by the parallelogram method of adding vectors.

Resolving a vector into its components along a chosen set of x and y axes. The components, once found, themselves represent the vector. That is, the components contain as much information as the vector itself.

To add vectors using the method of components, we need to use the trigonometric
functions sine, cosine, and tangent, which we now review.

Given any angle as in Fig. 3–11a, a right triangle can be constructed by drawing a line perpendicular to one of its sides, as in Fig. 3–11b. The longest side of a right triangle, opposite the right angle, is called the hypotenuse, which we label h. The side opposite the angle is labeled o, and the side adjacent is labeled a. We let h, o, and a represent the lengths of these sides, respectively.

Mathematical and computational thinking in 9–12 builds on K–8 experiences and progresses to using algebraic thinking and analysis, a range of linear and nonlinear functions including trigonometric functions, exponentials and logarithms, and computational tools for statistical analysis to analyze, represent, and model data. Simple computational simulations are created and used based on mathematical models of basic assumptions.

Although there are differences in how mathematics and computational thinking are applied in science and in engineering, mathematics often brings these two fields together by enabling engineers to apply the mathematical form of scientific theories and by enabling scientists to use powerful information technologies designed by engineers. Both kinds of professionals can thereby accomplish investigations and analyses and build complex models, which might otherwise be out of the question. (NRC Framework, 2012, p. 65)

Students are expected to use mathematics to represent physical variables and their relationships, and to make quantitative predictions. Other applications of mathematics in science and engineering include logic, geometry, and at the highest levels, calculus…. Mathematics is a tool that is key to understanding science. As such, classroom instruction must include critical skills of mathematics. The NGSS displays many of those skills through the performance expectations, but classroom instruction should enhance all of science through the use of quality mathematical and computational thinking.

Represent and model with vector quantities.

Operating with Symbols and Equations

AAAS Benchmarks (American Association for the Advancement of Science)
9B9-12#2: Symbolic statements can be manipulated by rules of mathematical logic to produce other statements of the same relationship, which may show some interesting aspect more clearly. Symbolic statements can be combined to look for values of variables that will satisfy all of them at the same time.
9B9-12#5: When a relationship is represented in symbols, numbers can be substituted for all but one of the symbols and the possible value of the remaining symbol computed. Sometimes the relationship may be satisfied by one value, sometimes more than one, and sometimes maybe not at all.
12B9-12#2: Find answers to problems by substituting numerical values in simple algebraic formulas and judge whether the answer is reasonable by reviewing the process and checking against typical values.
12B9-12#3: Make up and write out simple algorithms for solving problems that take several steps.
.