What is sound? How do we hear it?

Actually see the speed of sound at a Queen concert

Why pianos are never in tune: Math and Physics.

Sound is what people perceive when vibrating air molecules hit our ears.

Can we see sound?

Schlieren Imaging is an ingenious technique for creating images of anything that causes variations in the refractive index of air (or other fluid). This includes any phenomena that generate compression waves and/or temperature gradients. Aeronautical engineers have long used this, or a related, technique to visually capture fluid flow and shock waves to help them design aircraft and projectiles. This video by NPR provides a nice explanation of the technique. I especially liked the animated light-ray diagram they used, so I’ve captured this as a GIF which you can see by clicking the button below the video.

When any object vibrates, it causes movement in air particles. These particles bump into particles close to them, which makes them vibrate too – causing them to bump into more air particles. This movement – sound waves – keeps going until they run out of energy. If your ear is within range of the vibrations, you hear the sound.

Picture a stone thrown into a still body of water. The rings of waves expand indefinitely.

When vibrations are fast (short wavelengths), you hear a high note.

When vibrations are slow (long wavelengths) it creates a low note.

Misconceptions: Sound is made from moving air.

Myth popularized by the 1978 Maxwell ad, Blown Away Man. amazing image – but the physics behind it is all wrong.

The myth assumes that air molecules are moving from the source of the sound, to us.

But that doesn’t happen at all.

Notice that none of the participants go anywhere

The same is true for the compression waves in sound waves.

Look carefully at this animation:

You may at first see waves moving from one side to another,

Are they going anywhere?

Any object which vibrates, makes nearby air molecules vibrate, which then makes sound:

Speed of sound is different in different materials.

Loudness is related to the intensity in the sound wave

Pitch is the frequency of the sound wave

sound waves below 20 Hz are infrasonic

“Hertz was a German physicist who first conclusively proved the existence of electromagnetic waves theorized by James Clerk Maxwell’s electromagnetic theory of light. Hertz proved the theory by engineering instruments to transmit and receive radio pulses using experimental procedures. This  ruled out all other known wireless phenomena. The unit of frequency – cycle per second – was named the “hertz” in his honor” – Wikipedia 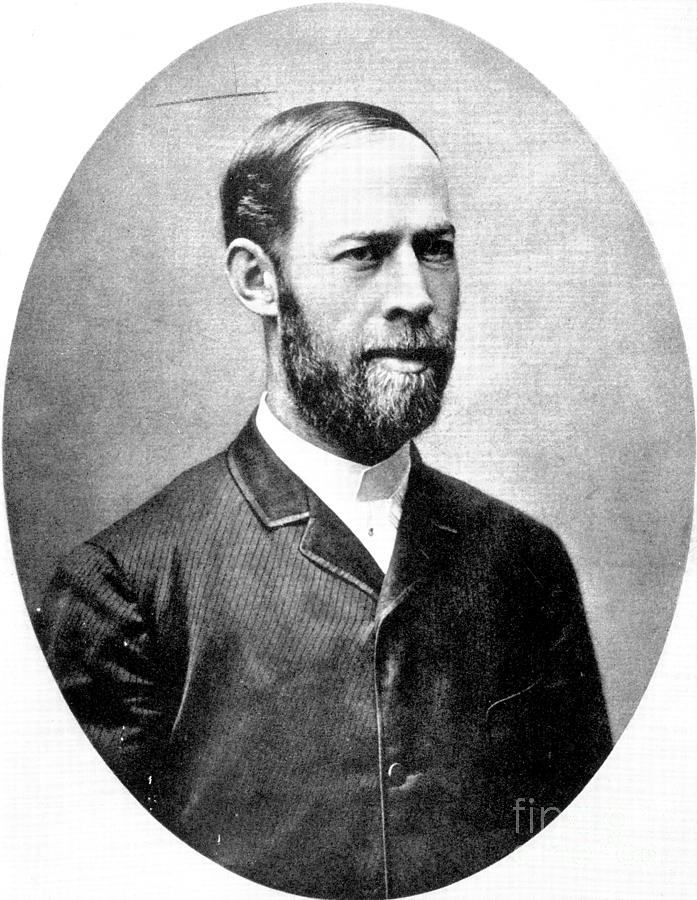 “Loudness is a sensation in the consciousness of a human being and is related to a physically measurable quantity, the intensity of the wave. Intensity is defined as the energy transported by a wave per unit time across a unit area perpendicular to the energy flow. As we saw in Chapter 11, intensity is proportional to the square of the wave amplitude. Intensity has units of power per unit area,

An average human ear can detect sounds with an intensity as low as XXXX and as high as YYYY (and even higher, although above this it is painful). This is an incredibly wide range of intensity, spanning a factor of from lowest to highest. Presumably because of this wide range, what we perceive as loudness is not directly proportional to the intensity. To produce a sound that sounds about twice as loud requires a sound wave that has about 10 times the intensity. This is roughly valid at any sound level for frequencies near the middle of the audible range” – Giancoli Physics

Sound intensity is usually specified on a logarithmic scale.

The unit on this scale is a bel, after the inventor Alexander Graham Bell

The ear and it’s response: Biophysics

The human ear is a remarkably sensitive detector of sound. Mechanical detectors
of sound (microphones) can barely match the ear in detecting low-intensity
sounds.
The function of the ear is to transform the vibrational energy of waves into
electrical signals which are carried to the brain by way of nerves. A microphone
performs a similar task. Sound waves striking the diaphragm of a microphone set
it into vibration, and these vibrations are transformed into an electrical signal
(Chapter 21) with the same frequencies, which can then be amplified and sent to
a loudspeaker or recorder.
Figure 12–5 is a diagram of the human ear. The ear consists of three main
divisions: the outer ear, middle ear, and inner ear. In the outer ear, sound waves
from the outside travel down the ear canal to the eardrum (the tympanum), which
vibrates in response to the impinging waves. The middle ear consists of three small
bones known as the hammer, anvil, and stirrup, which transfer the vibrations of
the eardrum to the inner ear at the oval window. This delicate system of levers,
coupled with the relatively large area of the eardrum compared to the area of
the oval window, results in the pressure being amplified by a factor of about 20.
The inner ear consists of the semicircular canals, which are important for controlling
balance, and the liquid-filled cochlea where the vibrational energy of sound
waves is transformed into electrical energy and sent to the brain.

The ear is not equally sensitive to all frequencies. To hear the same loudness for sounds of different frequencies requires different intensities. Studies on large numbers of people have produced these curves: 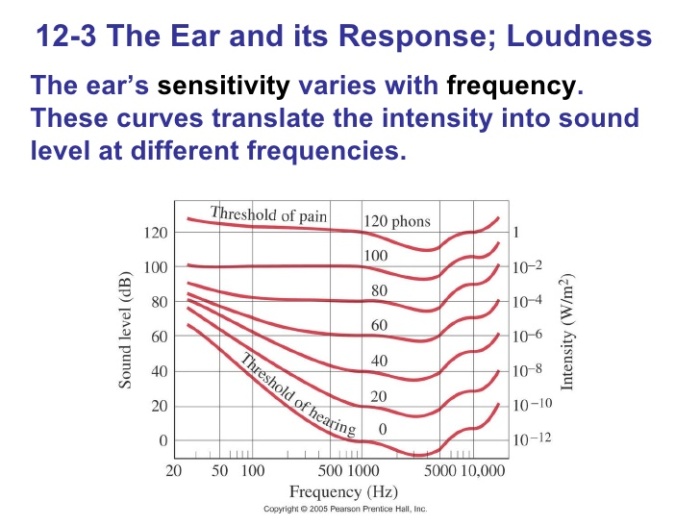 How music sounds affect the brain

How Playing Music Benefits Your Brain

HS-PS4-1. Use mathematical representations to support a claim regarding relationships among the frequency, wavelength, and speed of waves traveling within various media.

When a wave passes an object that is small compared with its wavelength, the wave is not much affected; for this reason, some things are too small to see with visible light, which is a wave phenomenon with a limited range of wavelengths corresponding to each color. When a wave meets the surface between two different materials or conditions (e.g., air to water), part of the wave is reflected at that surface and another part continues on, but at a different speed. The change of speed of the wave when passing from one medium to another can cause the wave to change direction or refract. These wave properties are used in many applications (e.g., lenses, seismic probing of Earth)